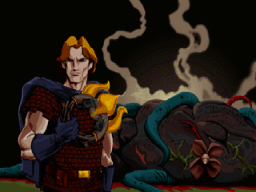 The nameless hero of Strife stands triumphant against the dark alien known as The Entity, the completed Sigil in hand.

Strifeguy is the nameless hero of Strife: Quest for the Sigil, a 1996 Doom engine game created by Rogue Entertainment. Initially a wandering mercenary in search of odd jobs, he becomes entangled in the conflict between the Front, a fledgling rebel insurrection on the rise, and the Order, a zealous religious totalitarian government which is rapidly taking over the world with use of advanced robotics and cybernetics, converting men into unquestioning machines and killing all women and children. Captured while approaching the town of Tarnhill in search of rumors of the Front, he is dragged to the sewage treatment plant by some of the Order's acolytes for extermination. However, due to the knife he keeps well concealed, he is able to kill his captors and escape.

Although the player sprites in the game depict him as a slightly more unique looking Front soldier, in-game cutscene art depicts him as a blond man with a blue cape, a red vest of leather armor, and blue elbow-length gloves. During play, his gloves are light gray, cover only the palms and fingers, and are strapped on the wrist. In addition to the gloves, he wears a bracer with electronics on his right arm. Presumably, this is where the communicator, computer map, and scanner interface.

Because Strife has heavy role-playing game elements, the behavior and moral character of the Strifeguy are to an extent defined by the player, as it is possible to make numerous decisions during the course of the game that reflect on the character himself, such as choosing to kill or not to kill characters who have outlived their usefulness, or accepting assassination quests over ones involving investigation tasks. On the whole, however, the Strifeguy remains within the parameters of a chaotic good alignment, acting on his own conscience, without regard to laws or regulations, but always with the aim of accomplishing the end of the Order and freedom for the people of his world.

After joining the Front as a mercenary special operative, the Strifeguy performs numerous difficult and extremely dangerous tasks assigned to him by Macil, the leader of the rebel movement, deep behind enemy lines in order to pave the way for an assault on the Order's castle, from which absolute control over Tarnhill is kept. After succeeding in this mission, Macil claims to learn of the Sigil of the One God from information found in the Programmer's files and sends the Strifeguy on an extended mission to acquire its remaining four pieces by eliminating the other leaders of the Order. Depending on the choices made, the Strifeguy may end up working for the Oracle, a supposedly neutral high priest who sympathizes with the Front, instead. Either way, he will eventually be confronted with the fact that Macil has at some point acquired a piece of the Sigil himself, and has been possessed by a spectre.

Strifeguy eliminates his former leader and puts the Front's command in the hands of senior officer Richter. He then goes on to destroy the rest of the Order and the fearsome force lurking behind it, the Entity. Also referred to as the One God, it is an ancient spectral abomination bent on consuming all life which was sealed away in its spaceship with the power of the Sigil. Destroying this monster accomplishes the liberation of the world, though depending on choices made, its fate may be more or less pleasant.

Strifeguy develops romantic feelings toward his handler, BlackBird, who speaks to him through the comm unit to give mission assignments, updates, advice, or simply to converse. If the game's best ending is acquired, the Strifeguy and BlackBird will kiss after meeting in person. Otherwise, he will never meet her in person due to an unknown incident.