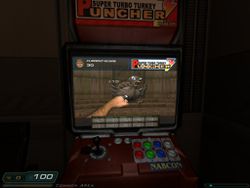 Super Turbo Turkey Puncher 3 is a recurring easter egg mini-game in the Doom series, having appeared in Doom 3, the expansions to Doom 3 in the Doom 3: BFG Edition release, and in Doom (2016).

The only point and mechanic in the game is punching of turkeys. Each turkey takes a number of punches to kill, with scoring varying on the Doom marine's timing of the punches. Once one turkey is killed, another falls into place while gobbling. In the original release of Doom 3 there is no beneficial consequence of playing the game, but obtaining a new high score of 25,000 points or more will cause an email to be received on the marine's PDA from the UAC human resources department, informing him that his wasting of time by proving himself a "shining example of humanity by punching defenseless turkeys" has resulted in an automatic deduction of two days' leave. In BFG Edition, this additionally unlocks an achievement named "Killing Time". 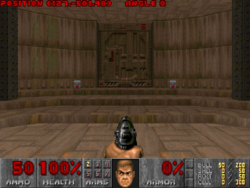 Original location from E4M9: Fear used in the game as a backdrop.

The game is formed mostly from Doom graphics, and features the fist, status bar face, gibs and a background which is actually a screenshot from E4M9: Fear from The Ultimate Doom. The game's logo is an allusion to Street Fighter Alpha 3, and the fictional developer Nabcon is likewise a reference to that game's developer Capcom. When killed, the in-game turkey breaks into gibs in the manner of exploded characters from the classic Doom games.