Concept art of the super shotgun and the meat hook attachment.
This article is about the weapon in Doom Eternal. For other versions of this weapon, see:

The super shotgun returns as a weapon in Doom Eternal, with a design mostly the same as its Doom (2016) predecessor. One detail in which it differs is an underslung grappling hook launcher known as the meat hook (which somewhat resembles a bayonet). The Doom Slayer can fire the meat hook into demons to traverse through the environment more swiftly and to easily move closer to demons to deal maximum damage with the shotgun itself. The super shotgun is obtained in Cultist Base where the Slayer neurally links to a revenant drone in order to obtain this weapon.

While the super shotgun itself appears to be of Earthly design, the meat hook is composed of metals not native to Earth, suggesting it may have been made on another world. The carvings upon it are written in a pseudo-Semitic script that, according to VEGA's information, has yet to be translated - this is the same language used throughout Argent D'Nur and Sentinel Prime, indicating that it is a cultural artifact of the Night Sentinels. VEGA refers to the weapon as "a relic of your past" and "your property" which has been hidden from the Slayer by the Hell priests.

The Ungmar Codex also attests to the weapon's long history with the Doom Slayer, which the demons call the "Diabolical Musket" and "Lucifer's Bane". According to the Codex, the demons curse the super shotgun's might and swear that one day they will melt it down and pour the slurry upon the Slayer's entrails. 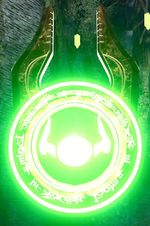 A grapple point from The Ancient Gods, Part Two

As its protip suggests, the super shotgun can deal massive damage at close range; like its predecessors, its only real weaknesses are its long reload time and lack of stopping power at a distance. The reload time can be mitigated by quick-switching to and from other weapons, while the meat hook can be can be used to quickly close the distance on foes or to traverse the battlefield. Enemies that are smaller than prowlers will be held in place when they are struck by the meat hook, but larger enemies will not be stunned and may attempt to hit you as you pull yourself towards them; be prepared to leap away if this happens.

The Ancient Gods, Part Two and Horde Mode include grapple points, which allow the Slayer to cross large gaps by attaching the meat hook and pulling himself towards them. While attached, the player can pull themselves towards or away from the grapple point to change their direction of travel.

Quick Hook
Meat Hook recharge time is decreased by 25%
Costs 3 weapon points
Fast Hands
Super Shotgun reload speed increased by 33%
Costs 6 weapon points
Mastery - Flaming Hook
The Meat Hook will set enemies on fire for a short time, inflicting damage over time and causing them to drop armor shards. Ignited enemies do not burn as long as they would with the flame belch.
Unlocked by killing 50 enemies while using the Meat Hook.