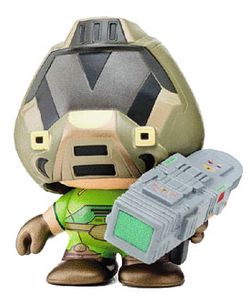 The Symbiote figurines are limited edition vinyl collectible action figures commissioned by Bethesda. The figures were manufactured by Symbiote Studios.

The first figurine to be released was the Doom space marine, commissioned for the 2013 twentieth anniversary of Doom's release. The figurine was designed by project lead Joseph Reiter and artist Curt Rapala. It has limited articulation in the hands and head, and comes with two detachable accessories, a space marine helmet and a BFG9000 weapon. It stands 2.5 inches in height.

A figurine of expanded universe character Phobos from Quake III Arena followed, as an exclusive for QuakeCon 2013, making it relatively rare. Excess figurines were sold on the Symbiote website for a short amount of time after the convention. It is largely the same as the Doom marine figurine and is accessory compatible, but features dark skin, an expression with visible clenched teeth which looks toward the character's right rather than the left, and has Phobos' characteristic orange uniform color. Reiter and Rapala are again credited for the design.

Reception within the Doom community was overall negative.[1] Perceptions of the character design were that it was too chibi to be suitable for the subject matter of Doom. However, it should be noted that this is the standard design motif for all Symbiote figurines, and was not chosen specially for the Doom-related merchandise.