TEKRKBRN is a single-level PWAD for Doom II. It was designed by Malcolm Sailor in 1995 as part of his THREE KICK ASS WADS collection. 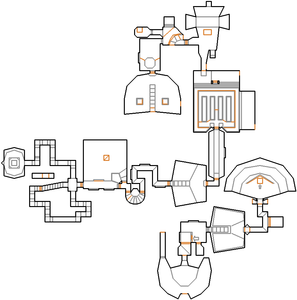 Map of TEKRKBRN
Letters in italics refer to marked spots on the map. Sector numbers in boldface are secrets which count toward the end-of-level tally.

There is a computer area map on a ledge - trying to jump onto its ledge will teleport you to a different area. Thus the maximum attainable items percentage is 87% unless the linedef is skipped by straferunning.