The title screen appears at the start of a Doom engine game and after its initial loading sequence. The title screen does not appear if command line parameters or a GUI launcher are used to begin a new game immediately.

The title screen for Doom (the TITLEPIC lump) is slightly different from the box cover art by Don Punchatz. It shows the marine from the box art in his distinctive green armor beneath the logo, but the background has been replaced by portions of the graphic used for the sky in Inferno, a hellish landscape. Other marines being killed by monsters, based on the game sprites, appear in a red hue on the sides of the screen, and a full-color cacodemon is shown on the upper left of the screen, by the game's logo. The id software logo is stamped on the lower right of the screen over a copyright notice.

The shareware version of Doom uses the same title screen as the registered version, except that it includes some information at the very bottom, written in a golden font over a thin black band.

The game's retail version, The Ultimate Doom, also shares Doom's title screen, but it has the text "The Ultimate" superimposed over the logo in the game's usual font, using a golden hue.

The title screen for Doom II (the TITLEPIC lump, as in Doom) is based on the game's box art, created by fantasy artist Gerald Brom. Like the box art, it shows the marine, without his helmet, fighting a cyberdemon, although the flames in the background have been made sharper by using graphics from the WALL22_1 texture patch graphics from the game. The title screen uses a slightly softer tint for its colors than the original art, and is inverted left-to-right in respect to it. 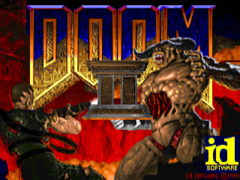 The title screens used in the two stand-alone megawads that make up Final Doom were made by the artists involved in their development and show a representative picture with the corresponding logo.

The title screen for Final Doom's Evilution seems to depict the space ship from hell orbiting near Io, where the Doom II modification by TeamTNT takes place, which is orbiting over Jupiter's reddish surface. The Evilution logo is superimposed over the moon.

The title screen for Final Doom's The Plutonia Experiment simply uses three-dimensional letters as the logo of the Doom II modification by Dario and Milo Casali, resting on a landscape with tiled rocky ground and under a red sky. The red sky is reminiscent of the sky seen in the second section of the megawad (levels 12 to 20) and the rough tiled floor is similar to the ROCK texture patch used in various levels.

The 2019 re-release now comes with 16:9 widescreen versions of the title pictures for its IWADs and most of the official add-ons. These widescreen edits were made by Stephen Browning (Scuba Steve), most of them originally for a widescreen graphics project by Nash Muhandes, and Stephen Browning allowed his work to be used by id Software officially on the condition that they remain free to reuse for non-commercial mods.[1]

The title screen for Heretic (the TITLE lump) shows the protagonist fending off some undead enemies using a wand, with the Heretic logo above him. The shareware offering of the game also uses this title screen. In all cases an RSAC gore and violence advisory label appears on the lower right portion of the screen after a few seconds.

Shadow of the Serpent Riders[edit]

The title screen for Hexen (the TITLE lump, as in Heretic) shows a Dark Bishop under an archway preparing to cast one of its green magic missiles at the onlooker. The archway reveals flames behind the cloaked figure. The four-level demo of Hexen uses the same title screen. As with Heretic, an RSAC advisory flashes on the screen.

Deathkings of the Dark Citadel[edit]

The title screen for Hexen: Deathkings of the Dark Citadel (the TITLE lump, as in Heretic) shows an enemy holding a sword in a cave, with the title text superimposed on top.

The title screen for Strife (the TITLEPIC lump, as in Doom) shows the Strife logo and some copyright text for Velocity and Rogue Entertainment.

Both versions of the Strife demo had only a message of copyright by Velocity.

The title screen for Chex Quest (the TITLEPIC lump, as in Doom) shows the Chex Man zorching two flemoids with a third approaching him from behind. The event is taking place on Bazoik.

The title screen for Chex Quest 2 (the TITLEPIC lump, as in Doom) shows the Chex Man in the restaurant from the first level in Chex City with a Flemoid behind him.

The title screen for Chex Quest 3 (the TITLEPIC lump, as in Doom) shows the Chex Man watching a Flemoid meteor shower.