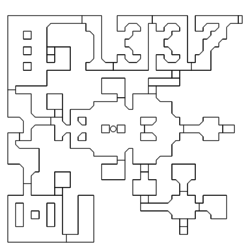 I recently obtained a copy of this. It uses its own file format, but hopefully I can reverse engineer some of the .bsp files and write a map renderer, so we can get some articles here on the wiki. Fraggle 12:17, 16 March 2006 (UTC)

Fraggle, the maps are awesome. Did you document any of the files you reverse engineered? It would be great for a technical section on Doom RPG. Zack 20:36, 8 January 2008 (UTC)

What if I cited the page in Masters of Doom where it says John Carmack hates patents? :P

Actually, IS there a way to show that? Would I have to search through Google patents or something? And, why would a patent forbid me from talking about how it works? I've never heard anything like that. Zack 02:35, 9 January 2008 (UTC)

No, there is nothing wrong or legally dangerous whatsoever about writing about a patented file format. Indeed, the patent system exists as a way to promote publication of information about inventions.
It's different when actually writing programs, of course. I personally prefer Linus Torvalds' attitude to patents: it's actually counterproductive to go looking up patents, because (1) it's basically impossible to write any medium-sized program now without infringing on someone's patent and (2) if you knowingly infringe on a patent, the damages can be trebled. Fraggle 13:31, 9 January 2008 (UTC)

Could a patent holder claim damages if our documentation made it easier for people to produce unlicensed add-on levels?  IIRC the MAME people have received nasty letters from Sega along these lines.    Ryan W 02:33, 10 January 2008 (UTC)

Not for patents, no. I don't know the specifics about the MAME thing but they really were sent patent infringement threats over publishing documentation, that sounds completely baseless.
From wikipedia's article on trade secrets: "In the United States and many other countries, even if an artifact or process is protected by trade secrets, reverse-engineering the artifact or process is often lawful as long as it is obtained legitimately. "
In practice, Id have always been fairly laid-back about fan-made add-ons, even back in the Wolf3D days. Even if there was any legal basis, I really don't think there's any problem here. Fraggle 12:15, 10 January 2008 (UTC)

Id is always a bad example to use in copyright discussions, because its relationship with the community is largely governed by weird gentlemen's agreements that started when the first PWADs appeared.  As you point out, it is not permitted to ask questions about them, so newcomers like myself are supposed to learn to act blase and mature and pretend we understand.  (I am making no friends among the Doomworld moderators even by saying that, I imagine.)

As you also point out, legal action would not come from id, but from others with a financial stake in the property; and it would not be so much to sell copies of Doom as to scare other retrogamers (as with that Ernie Ball thing in 2000).  From the industry's point of view, every retrogamer represents $2000 a year in latent revenue.  How many retrogamers are there in the U.S. alone?  5 million?

I wouldn't fidget over this so much except that [a] Wikia's terms of use make it quite clear that the editors themselves are responsible for any content disputes, and [b] under U.S. law the defendants in a civil case still pay legal fees even when exonerated.  Therefore, the Doom Wiki's first major error might well be its last.    Ryan W 23:09, 10 January 2008 (UTC)

Masters of Doom also says that John Carmack is actively opposed to doing paperwork of any kind.   :>     I question how seriously his views would be taken anyway, if push came to shove with the publisher(s).  Universal Press Syndicate was quite willing to sack Bill Watterson after four years on the job, and Tom Cruise's views on re-editing Eyes Wide Shut were pretty much ignored.    Ryan W 02:33, 10 January 2008 (UTC)

Thanks for asking. Yes, I have documented the Doom RPG format using a BNF-like notation similar to that used in the Doom FAQ to describe the WAD format. Fraggle 21:48, 8 January 2008 (UTC)

Does somebody know how can i rip the sprites from the game?

Yes, though it's not exactly simple. I've written up the details at http://www.neocomputer.org/projects/doomrpg along with other technical information about the game. Recompile (talk) 18:17, 23 June 2017 (CDT)

I found the strangest bug in this game, i downloaded it on my cdm9200 Audiovox cell phone, every time i used the fire extinguisher,rocket launcher, or plasma gun the sound was sent into my fathers bluetooth headset... but the strange thing is that my phone can't use bluetooth at all! strange... this is true it actually happened... this is no garbage. User:Cabooser417 (talk)

i have made pictures on java cellphone. they are all mine. use them.

i loved the id cellphone games, the ios versions not so much.

all monsters on 1 picture, i cant remember where i found it http://www.quake.de/pictures/id_ges/java-drpg-allmonsters.png

a link about that, from the mighty wire :D http://www.wired.com/gamelife/2007/11/id-software-lau/