Tantrum 2 is a single-level PWAD for Doom II. It was released by Ola Björling in 1998 and made it into the Top 100 WADs of All Time as one of the entries for that year. 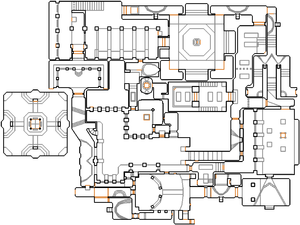 Map of Tantrum 2
Letters in italics refer to marked spots on the map. Sector, thing, and linedef numbers in boldface are secrets which count toward the end-of-level tally.

A shotgun guy (Thing 269) in the monster cache behind the blue skull key has no flags set for any of the three difficulty classes, so it does not actually appear in the level. The same goes for the player 1 start (Thing 0), but because of special handling in the engine, it functions normally in the level.