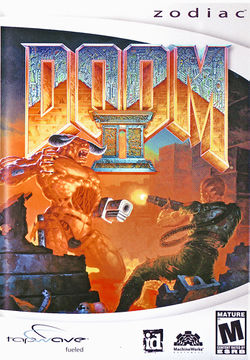 Doom II for Tapwave Zodiac was released in 2004 by Tapwave, Inc. This port of Doom II was developed by MachineWorks Northwest, LLC, who also handled the Pocket PC port.

Differences from the PC version[edit]

The game is an accurate port of the PC version, but features several differences. This port runs at a screen resolution of 480x320. The music runs significantly faster, and the menu background is darker. No demos are played at the start of the game. This port has six slots for savegames. All cheats of the PC version work, although activating the on-screen keyboard is a bit tricky.[1] This version has a warning screen that shows up when the battery is low and states that the game will exit, which is a standard feature for the Tapwave Zodiac.