Tech Gone Bad is a single Doom level for limit-removing ports created in 2016 by John Romero as a warm-up exercise before working on a new FPS game, Blackroom. It is an alternate take on E1M8: Phobos Anomaly.

It was named as a winner of one of the 23rd Annual Cacowards. 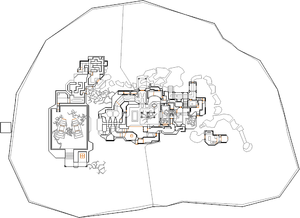 Map of Tech Gone Bad
Letters in italics refer to marked spots on the map. Sector, thing, and linedef numbers in boldface are secrets which count toward the end-of-level tally.

Those with any familiarity with The Ultimate Doom will remember that Romero's contributions to Thy Flesh Consumed (E4M2: Perfect Hatred and E4M6: Against Thee Wickedly) marked the peaks of difficulty of the game. Unfortunately for you, Tech Gone Bad is somewhere around that difficulty level. Packing 291 enemies on Ultra-Violence and above, this level would have made a fitting end to Knee-Deep in the Dead if the episode had been tuned to "modern" difficulty levels.

Any time you see red "cracks" in the floor, do not stand anywhere near them - the surrounding areas are damaging floors.

You begin in a rectangular room, with a zombieman facing away from you in a far corner. On Ultra-Violence and above, there is also an imp facing away from you. When you attack them, a teleport trap activates, and up to three shotgun guys, a spectre (Hurt me plenty and above only) and an imp (Ultra-Violence and above only) begin teleporting next to the barrel to your left. That barrel is a problem - blow it up at the wrong time, and you might be badly hurt. On Hurt me plenty and above, there is another barrel in the west of the room, which poses the same problem. Kill each monster as it teleports into the same spot, but if the spectre is first out the gates, you might wish to grab the shotgun in the south of the room first (blow up the barrel in the south first!).

On difficulties other than Hurt me plenty, the fastest route is to drop into the slime channel of this room. On Hey, not too rough and below, you will get a radiation suit near the entrance of the channel. On Ultra-Violence and above, the radiation suit is further into the channel. After a while, the channel will widen. Kill the shotgun guy ahead (and an extra demon and imp on Hurt me plenty and above). As you continue forward, watch for a demon ambush from the right. Continue to the end of the passage and grab the blue key.

Exit the blue key area via the south. You are now in the slime surrounding the main part of the level. Make a dash for the northernmost rock platform, which is low enough for you to step up onto. All this while, you will have to dodge fire from shotgun guys and imps. Head up the stairs in the south, and mow down the cannon fodder in the blue corridor ahead (a nearby barrel may come in handy here). Grab the armor from its alcove and continue forward to a blue door.

This next computer equipment room is full of former humans. There are also up to four imps and on Ultra-Violence and above, a spectre. Make your way to the switch in the northwest of the room (on Ultra-Violence and above, watch for a shotgun guy in ambush). Flip the switch and immediately turn around: The lift in the west of the room will lower with two shotgun guys (one on Hey, not too rough and below). Dispatch them and ride the lift up.

This takes you to a room with a shotgun guy. On Hurt me plenty and above, there is also a zombieman and a demon. See if you can cause some monster infighting by getting the shotgun guy to hit the demon. Grab the well-needed box of shells and flip the switch ahead. This raises a bridge to the island with the yellow key and reveals some enemies near that island (an imp and up to four shotgun guys).

Use the switch to the right of the platform to re-lower it. A window will have opened in the north of the previous room, and some steps will have formed next to it. Use these to jump out of this building and land back on the earlier rock platforms. This time, make your way southeast and pick up the yellow key from the island.

Head to the north side of the map, and climb the rock platforms to the west to a yellow door. Open this door and dispatch the enemies in here (up to five shotgun guys, an imp and a demon). Follow the passageway to the west around, being wary of demons (Hurt me plenty and above only) and spectres (Ultra-Violence and above only). At the end of the corridor is a large room with some zombiemen and up to two spectres. Flip the switch in the southwest corner to open the easternmost of three alcoves.

Head into the eastern alcove and clear out the cannon fodder until you reach a larger room with a demon. Blow up the two barrels next to a wall. Unless you want 100% kills, do not flip the switch you see ahead. Instead, head into the central slime pool to the north and collect the rocket launcher, then head back into the larger room. A switch will have opened south of the switch you saw earlier. Flip this switch and backtrack to the room with the three alcoves. Two imps and a shotgun guy will have teleported into this room, so kill them.

The centre alcove is now open, so enter it. This leads into a darkened corridor. Kill any monsters, than carefully proceed forward. Once you hear a door open, immediately turn around - a trap has opened between the two floor lamps in the corner, with up to three imps, a shotgun guy and a demon. Move forward - you do not want to fall into the eastern part of this room with a substantial number of monsters. Collect the armor from the trap. Once done, cautiously proceed east again until you are able to aim at the monsters in the pit to the east. Dispatch of them (preferably with the help of the barrels), then drop into the pit. Lower the pillar with the box of rockets on it, and collect it to light the room up. Flip the switch in the west to lower the nearby platform, then ride it back up. Backtrack to the room with the three alcoves. Two imps and a shotgun guy will have teleported into this room, so kill them.

The western alcove is now open, so enter it. Head up the steps and mow down the former humans. You will reach a raised area with a spectre (and an imp on Hurt me plenty and above). A rocket should deal with the imps on the ledge to the west. Enter the corridor in the east and run forward, eliminating any shotgun guys and imps in your way. At the end of this corridor is a doorway leading to a walkway in the northwest of the central slime pool. Run along it to reach the octagonal platform in the northeast. Flip the switch in the south of the pillar to raise a bridge to an alcove in the east, then enter this alcove.

Follow the corridor around, mowing down imps and former humans. Collect the red key in the room at the end of this corridor.

Backtrack to the yellow door. The fastest route is to head to the south of the central slime pool (returning to the area after the easternmost alcove), then backtracking from there. Beyond the yellow door, you will find that a new set of rock platforms has appeared to the west, leading to the red door. Dispatch the newly-revealed enemies with a well-placed rocket, then go through the red door.

Beyond the red door is a computer building. Clear the floor of former humans. If you managed to acquire a berserk pack from one of the secret areas, you are in good hands. Proceed through the alcove in the north. It leads to a long, winding passageway with shotgun guys, imps, demons and spectres - all of which are easy prey to a berserk fist. At the end of the passageway, a silver platform will lower as you approach it. Ride it up (do not fall of this next ledge!) and flip the switch in the west.

Backtrack to the first room beyond the red door. Two traps will have opened along the passageway, so be wary:

Back in the first room, watch for a trap with up to three imps. The northwest of the room will have opened up, so walk towards the silver platform to lower it, then ride it up. Clear out the cannon fodder along this walkway. You will face another building across the slime, with a sizable number of enemies. A carefully-placed rocket should do the job. Jump across the slime into the new building.

From where you landed, take the eastern passage. Equip your chaingun and kill any imps in this passage. You will come to a room with a divider - kill the imp and shotgun guys (if any) beyond it. Head to the southeast of the room, kill the imp in the alcove and flip the switch behind it.

Head back to the northernmost part of this building. This time, take the westernmost ledge to reach a corridor that allows you to go around the divider in the previous room. Grab the rocket launcher in the west of this room and prepare for a massive teleport trap. On Ultra-Violence, this is what you will face:

Head back on the ledge you used to enter this part of the room, clear the enemies and return to the areas north of the divider in this room, where you can mow down the enemies with your rocket launcher safely. Once done, take the westernmost ledge and head back around the divider. Enter the blue room to the west and walk into the corridor in the southwest.

The floor in the corridor will begin lowering you into a massive arena with two massive structures. This is the arena of the original Phobos Anomaly, re-imagined 23 years later. Just like old times, you will face two barons of Hell who emerge from their respective "portals". However, this time, their supporting monsters will emerge from their "portals" as well. In total, each portal will generate a shotgun guy, a spectre, two imps and two zombiemen. Kill them all, and when the barons have been felled, the south of the arena will open.

Head through the blood-stained corridor to reach a demonic altar. Once you step into it, you are taken to a dark room with monsters and a damaging floor. Once your health falls below 11%, the level ends.

One imp (Thing 16) has no flags set for any of the three difficulty classes, so it does not actually appear in the level.

* The vertex count without the effect of node building is 3340.

A side effect of this is that the cracks, having been set to sector type 8 (light oscillates), cannot have the sector type required to be a damaging floor. However, since they are so narrow, the player will not be able to stand in them, and will instead be hurt by the damaging effect of the surrounding areas.

Tech Gone Bad is contained in a ZIP archive whose filename is e1m8b.zip. Said ZIP archive has the following SHA-1 checksum:

The contents of e1m8b.zip are as follows: