Technicolor Antichrist Box is a single-level PK3 for Doom II requiring the GZDoom source port that came out in May 2020. It was designed by Shannon O'Neill (Major Arlene) and uses the music track "Kontayjen" by John Weekley (PRIMEVAL). The par time defined in ZMAPINFO is 20:00. The mod was selected as one of the runner-ups at the Cacowards 2020 ceremony.

On June 15, 2021, an anniversary edition was released with a new color scheme, re-tooled fights, new music, and a newer version of the integrated Supercharge gameplay changes. 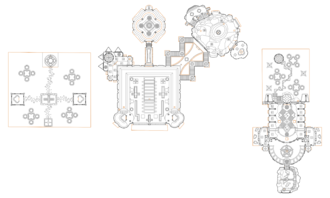 Map of Technicolor Antichrist Box
Letters in italics refer to marked spots on the map. Sector, thing, and linedef numbers in boldface are secrets which count toward the end-of-level tally.

A map spot (thing 2587) is not flagged on I'm too young too die and Hey, not too rough, but the two weak cyberdemons do. This map spot is used to alert them when you enter the northern part of the central area behind the locked door. So these two monsters will never be alerted and teleport, preventing 100% kills.