In true form to its roots in science fiction and its setting in the mid 22nd century, Doom 3 portrays a multitude of advanced technologies which were developed by the UAC on its Mars base both for goals related to their ongoing Martian expedition and for eventual deployment on Earth and in other portions of the solar system.

The Alpha Labs were the first major above-ground research facility constructed on Mars by the UAC. As such, they house a chain of mature research projects which, at the time of the demonic invasion of the facilities, were poised to shortly revolutionize human life everywhere. 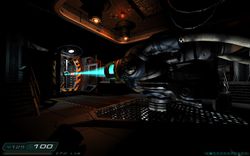 The Elemental Phase Deconstructor at work.

Housed in Alpha Labs - Sector 1, the Elemental Phase Deconstructor, or EPD for short, is a device which uses some unknown principle in quantum physics discovered by Dr. Malcolm Betruger prior to his diversions with teleportation research to break down iron oxide molecules extracted from the Martian soil, particularly Fe₂O₃, or common rust, into subatomic particles. The resulting subatomic particles are then fired in the form of a plasma-like beam into a collection chamber at the far end of the device, where recombination into any type of chemical element is possible.

The primary use of the EPD by the UAC in its current form on Mars was to serve as the basis of a chain of supply for two resources - hydrogen fuel, necessary to support transportation throughout the solar system, and water, particularly for the Mars base itself. While the EPD in its current state is said to only support the synthesis of such simple elements as hydrogen and oxygen, the UAC planned to eventually extend its utility arbitrarily, even to the point of creating organic matter.

The EPD feeds its output into several other systems on Mars, including the next steps in the Alpha Labs research chain, the Hydrocon and Molecular Fuel Compactor.

Waste from the EPD, resulting from contaminants in the Martian soil which are not fully broken down, is said to consist of various organic and radioactive constituents which form the basis of nukage.

In real life under known physical processes, the energy required to break down a stable, massive molecule into its constituent elements alone can be large. To further break down the stable elements into their constituent subatomic particles would require a much larger amount of energy input, on the scale of a nuclear reaction. The strong force which binds the protons and neutrons of atoms is the strongest short range force in the universe, hundreds of times more powerful than the electromagnetic force which governs most macroscopic interactions. It would require a fundamental revolution in the standard model of particle physics to allow for an energy return on energy investment from this process. It would also ordinarily release a large amount of energy and radiation as well, whereas the device is depicted as being largely unshielded and apparently relatively cool. 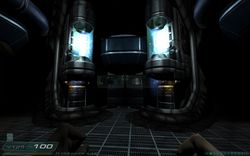 The Hydrocon's primary purpose is to extract pure hydrogen fuel from the output of the EPD. The process used to create this fuel is said to incidentally create water as a byproduct, providing a cheap source of the critical compound. The Hydrocon is designed to concentrate and purify the substance. Plans for the Hydrocon were intended to forever end the spectres of resource depletion and its resulting wars, as well as enable the eventual terraforming of Mars into an Earth-like world. It supplies the Martian base with all of its water, removing the necessity to transport the substance from Earth or extract it from exceptionally rare reserves in the Martian soil.

Because pure elemental hydrogen is a simpler molecule than water, which includes two hydrogen atoms and one oxygen atom, and the combination requires input of energy, it is unlikely that a process could not be devised to prevent such a reaction, and thus the creation of water would need to be an intentionally induced reaction. Indeed, the reaction required to create water is in fact extremely dangerous - the combustion of large quantities of hydrogen in the presence of oxygen leads to a massive explosion, similar to the Hindenburg disaster. The Hydrocon on the other hand is shown to be an exceptionally fragile device, and suffers such a catastrophic explosion if even slightly glanced by small arms fire. It appears to function on a process similar to electrolysis, by running an electric current through vapor. However, this is ordinarily a process used to break down water, not to create it. 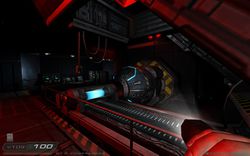 A hydrogen fuel canister is fed into the MFS.

The Molecular Fuel Storage Compactor (sometimes also referred to as "Compressor"), or MFS for short, is a device which also exploits novel quantum particle physics research to somehow overcome or weaken the Pauli exclusion principle, compacting hydrogen gas molecules by squeezing them into some type of crystalline lattice, making the space between molecules smaller than it could be under normal circumstances. This allows a significant increase in fuel storage capacity which the UAC intends to harness to expand its already ongoing deep space exploration projects and allow faster, more frequent travel between worlds.

The technology devised for the MFS was subsequently applied by weaponry researcher Theresa Chasar in constructing the next generation of UAC plasma gun ammunition. It is unclear if the plasma canisters found in the game are already using this advancement.

Even if it were possible to compact hydrogen fuel, the mass of the fuel would not decrease, and the weight of cargo is a consideration for all shipping activities. While more fuel could be carried, more fuel would also be expended in its transport as cargo until it is needed for use. The real advantage is thus at least limited to the reduction in volume and weight of the shipping containers.