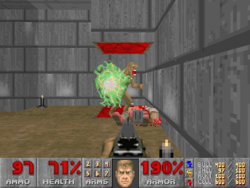 A teleporter in use on E2M1: Deimos Anomaly

A teleporter moves players and monsters from one location on the map to another, almost instantly, with a flash of green fog and a whoosh noise.

Conventionally, a teleporter is constructed as a 64-unit square with a distinctive floor texture; however, this is not a technical requirement. All sides of a teleporter usually teleport to the same place, but again this is not required: some levels attempt to confuse the player by sending him/her to different places depending on which side the teleporter is entered from.

Doom teleporters do not conserve momentum and after the player teleports, there is a delay of 18 tics (about half of a second) before he can move again. Monsters are not affected by this.

Barrels will also teleport if they cross a teleport line, e.g. recoiling from a shot.

Teleporters figure prominently in Doom's background story: it was an unexpected side effect of UAC's experiments with teleportation that opened the gates of Hell.

In classic Doom, there are four linedef types for teleporting. These implement the combinations of one-time versus repeating and players or monsters versus monsters only. All of them are of the walk-over variety. Teleporter linedefs are direction-sensitive, which is necessary for cases where the landing area is another teleporter, so that the player can walk off the landing spot without teleporting again.

The linedef's tag specifies the destination sector: the lowest-numbered sector with the same tag value. Within that sector, there must be a teleport landing Thing, which specifies the coordinates and angle the player or monster will have after teleporting. If there are several teleport destinations in the tagged sector (or sectors), only one will be used; the one with the lowest thing number in the sector with the lowest sector number.

Boom introduced some extended teleporter line types, including switch-activated teleporters and silent teleporters. The latter preserve player orientation, position, momentum and height so that the teleport may not be noticed; this can be used to simulate rooms over rooms and for other special effects.

Heretic and Strife use teleporters in the same way Doom does. In Hexen, however, teleporters are set differently. Taking advantage of the presence of a thing ID in the Hexen map format, teleport destinations are given a TID and the teleport is set up to reach a random destination among those with the correct TID. Sector tags are not used.

Teleport landings themselves are always invisible; the engine creates a separate object for the fog sprite (TFOG, also drawn at the departure point after the character disappears). The corresponding sound sample is DSTELEPT.

The Doom IWADs contain the following numbers of teleport landings per skill level:

The Heretic IWADs contain the following numbers of teleport landings per skill level:

The Hexen IWADs contain the following numbers of teleport landings per skill level:

The Strife IWAD contains the following numbers of teleport landings per skill level:

Of the maps covered on the Doom Wiki, the following have the highest numbers of teleport landings in single-player on skills 4-5:

Areas where the player may be tempted with pick-up items such as powerful weapons, health, or armor, or necessary progression points such as switches and keys, may often be setup to open a door inside a remote area connected to the map by a "sound tunnel," a small thin sector through which sound can propagate, or through areas remotely joined into the same sector, within which are waiting many monsters who will then teleport close to the player or elsewhere into the map one at a time. This is often referred to as a teleporter trap. A few notable examples occur in Doom itself on E1M9: Military Base, in Doom II's MAP16: Suburbs, in the No Rest for the Living expansion's MAP01: The Earth Base, and in countless PWAD levels.

In the backstory of Doom, it is explained that teleportation research was being carried out by the Earth military inside the UAC's bases on the two moons of Mars, Phobos and Deimos. Initial experiments consisted of throwing small objects such as tools into the "anomaly" at one site and watching them emerge from the other. Once human experiments started, however, the process was noted to have severe side effects - subjects would emerge babbling, cursing, behaving violently, and in some cases, suffering from a fate referred to as "random full-body explosion." Tests continued unabated, however, until one day a distress signal was sent down to the surface from Phobos stating that "something fraggin' evil" was emerging from the gateway. Meanwhile, Deimos had vanished from the sky completely, taking the other end of the teleportation gateway with it. After the Doomguy's squad lands on Phobos and is promptly annihilated by the unknown invaders, the game's protagonist learns that the teleporters have opened a gateway to Hell itself.

Teleporters are much more limited in Doom 3 and appear in the original campaign only within the secretive Delta Labs, where they were developed based on technology reverse engineered from the remains of an ancient civilization on Mars by a team under the leadership of quantum physicist Dr. Malcolm Betruger, despite encoded warnings against their use which were not fully understood until it was too late.

According to Dr. Richard Meyers, the Delta teleporters were developed in three stages. Project Mercury, completed in 2139 as the first functioning device based on the Martian prototype found below the Erebus Facility at Site 1 in 2115, was a short-range teleporter capable of moving a single human-sized subject across a test chamber to a single destination pad on the other side. The first problems with teleportation were noted immediately when one of the first few test subjects emerged on the destination pad with severe laceration injuries, which the scientists presumed must have been self-inflicted somehow, despite not understanding how such an injury could occur in what should be an immaterial state of transfer. A variable time delay in apportation was also noted, even though all mathematical models predicted that every step of the process ought to be instantaneous. A camera droid sent through at one point captured several seconds of video displaying what appeared to be a creature with numerous eyes, most likely an imp.

Regardless of these problems, Project Gemini was developed rapidly thereafter, consisting of several mid-range teleporters capable of moving subjects to destinations across the Delta Labs, with an additional longer-distance one-way link established to an unnamed device in the Phobos Labs facility. Accidents and oddities continued with this project, including the death of a test chimp during a routine experiment in which the device activated unexpectedly, and test subjects began to manifest severe psychological and physiological deterioration, including ravings about Hell and demons, speaking in tongues, self-mutilation, an unrecognized progression toward zombification, and in many cases, suicide.

Despite the now obvious dangers, Dr. Betruger's unrelenting obsession with the dimension to which the teleporters seemed to connect led to the development of Project Apollo, a room-sized teleporter capable of moving whole teams of people and sizable devices and equipment into the other dimension for purposes of exploration and capture of specimens. The energy and data processing requirements of this device drove the Mars City base into a state of disarray, as equipment across the facility malfunctioned or could not be used effectively. Many teams began teleporting into the other dimension on a regular basis, and many never returned at all. It was at this time that people across the Mars base also started to be affected by strange visions, auditory hallucinations, gruesome and usually fatal accidents, and unexplained fugues during which they would violently attack their coworkers.

Still unsatisfied, Betruger also initiated the development of another powerful device in its own entirely new research facility, the top-secret Exis Labs, which would be capable of bi-directional teleportation of large devices such as rovers and even drop ships. To complete the bi-directional capability, a matching device was built in Hell, within the remains of an outpost built there by the ancient Martian civilization. Though incomplete as of the time of the invasion of Mars City by the demons, this device was recognized as a possible threat to Earth once Dr. Meyers understood Betruger's intentions, and he set out to destroy it.

Unable to wait any longer in his evil plans in concert with the demons, who had offered him unlimited power in exchange for enabling them to reach Earth, Betruger used the Delta Apollo teleporter to unleash an invasion of the Mars base by taking the Soul Cube through the portal on an unscheduled trip. For reasons not fully explained, this device being taken to Hell caused the portal to remain permanently open, enabling a massive invasion.

In Doom (2016), the mechanisms behind teleportation are evidently well understood by the UAC, but these are never detailed in the game. Beginning in 2145, the UAC began both manned and unmanned expeditions into Hell known as the Tethering Operations. These expeditions had the primary goals of retrieving artifacts and creatures through use of a technology known as the tethering device, a sort of interdimensional beacon that enables retrieval of objects from other dimensions even when a freely open portal is not available.

The UAC is evidently capable of sustaining various types of interdimensional portals, as devices in the Argent Tower and the Lazarus Labs are both referred to using this name. The former was a carefully regulated rift which enables the UAC to sap Hell's infinite Argent energy. The latter was apparently primarily used for the Tethering Operations, until Dr. Olivia Pierce used it to unleash a Hell wave which destroyed the entire facility.

Breaching containers of highly concentrated, unrefined Argent energy can cause temporary rifts to form, teleporting nearby people and objects into Hell. In Doom VFR, Dr. Peters is also capable of creating such a temporary rift by simultaneously firing all of the prototype BFGs, as that gun is also based on Argent power.

The personal teleporter allows short to medium range teleportation in the form of a hand-held, throwable device in multiplayer.

Doom VFR also introduces a short-range teleportation capability for rapid movement through the virtual reality environment. Use of this feature teleports Dr. Peters' cybernetic body to the location where the targeting reticle appears. Interestingly, the target has the appearance of a pentagram, suggesting that this form of teleportation is based on demonic principles.

In the 2005 Doom movie, a teleportation device called the Ark was discovered on Earth in 2026 and was moved by the government to a facility at Area 51. It was discovered to control a wormhole, with the other end exiting at an ancient city on Mars. It proved useful for accomplishing instantaneous interplanetary travel, and was used to move supplies and personnel to and from the UAC base at Olduvai. It becomes a danger to Earth after experimentation with an ancient Martian retrovirus goes out of control, spawning demon-like monsters who spread the infection to others while killing and maiming. Marcus "Pinky" Pinzerowski's refusal to destroy the Ark, the study and operation of which he dedicated much of his life, allows the monsters to threaten Earth. It is ultimately destroyed by John Grimm at the end of the film, when he tosses a grenade through it to kill Sarge.

The Ark portal appears like a large levitating watery ball while the device is active, expanding to fill the platform and then receding and vanishing afterward. Instability during its early operation was responsible for the loss of Pinky's legs.