Jon "Teppic" Dowland is a Doomer whose community contributions started with Doom Legacy mods and moved onto Freedoom, the Doom Wiki, PrBoom, WadC and Chocolate Doom.

He was first involved in the Doom community in around 1997 after he read about Doom Legacy in a magazine. Through a link on Doomworld he was introduced to IRC and #doomroom.

Most of his work in the late nineties was centred around Doom Legacy. He befriended Mike Fredericks (Gokuma) and Ebola, and was involved in a lot of play testing and experimenting with ideas.

He released very little publicly, with the notable exception of smallfun2, a special-effects level demonstrating some effects possible in Legacy, such as coronas, rays of light, lifts on top of other lifts, and others. 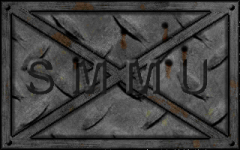 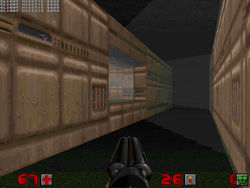 rays of light in smallfun2

Later, he was one of the first people to help beta-test TCP/IP based multiplayer with Legacy and csDoom.

In September 2000, he released his first play-oriented level, Lift Tension, which was part of the Doomworld 10 Sectors megawad.

He also contributed textures to the Nimrod partial conversion (2002) for Doom Legacy, and in 2005 released Doom Noir, a (mostly) black and white PLAYPAL/COLORMAP replacement.

Until May 2008, he co-maintained the Freedoom project alongside Fraggle, contributing texture patches, levels, sounds, the current website design and various bits of the build infrastructure.

From around 2008 until around 2012 he maintained various Doom-related packages in Debian GNU/Linux. He also wrote some small bits of code for PrBoom.

In 2017 he contributed a level for the Heretic Upstart Mapping Project. The level was generated from a WadC program.

Also in 2018 he created Liquorice[2], a Haskell library for constructing Doom maps, inspired by WadC.

In 2019 he created the first PWAD to use vanilla conveyors, BRutal EXtinction International Tournament[3][4], created with WadC.

He is author of HWadTools and Liquorice.