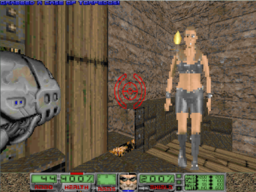 The terminatrix is a type of enemy from Hacx. These mutant women possess 450 hit points.

A terminatrix attacks by firing orange orbs at a target. These orbs are faster than those of the phage and do more damage, but they are only fired one at a time. Additionally, they possess a little-seen ability to revive monsters in the same manner as the arch-vile.

Its melee attack is a drop-kick which pushes the player in the air by 55 units, similar to arch-vile's strike attack. Unlike most melee attacks, this one ignores melee range of 64 units, meaning the player will still be pushed in the air regardless of the distance between him and the attacking terminatrix.