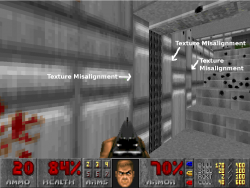 Texture alignment in the Doom engine is affected by a number of factors. It can at times be more complicated than in modern true 3D games.

Ordinarily, most textures consist of a number of repeating shapes to create a pattern. Bricks for example almost always consist of a pattern of similarly shaped rectangles. The objective of aligning a texture appropriately is attempting to position the texture on the wall so that as many of the intended shapes included in the texture are displayed without being cutoff by a vertex in your wall. In the screenshot in the right, the rounded shapes in the texture are cut off by the differing height levels of the adjacent sectors that are decorated with the same wall texture. In many cases the texture can be aligned to repeat the texture so that none of the intended shapes are being cut off. Sometimes this can be very difficult to do, and can often be fixed by using a different texture designed to fit that particular length and height of the wall you are applying a texture to. In some cases, textures with no particular cracks (or too many to draw attentiont to) or bevels displayed in the image can be used in just about all lengths and heights of a wall, but using it excessively can make a map look very dull. The most rewarding part of mapping these days is how effectively a mapper can align the textures in a map.

Level designers must ensure that textures tile in a consistent and aesthetically pleasing manner, such that the player is unaware that walls, floors and so forth are actually made of repeating textures rather than a single, continuous texture.

All floor and ceiling textures are aligned on a 64-unit grid. Because of this, in some cases the only way to align a floor texture is to move the position of the sector which defines the floor itself.

Some ports such as Boom add the ability to change the alignment of floor and ceiling textures, even allowing effects such as moving conveyor belts. These are typically implemented using a separate linedef tagged to the sector.