The Adventures of Square 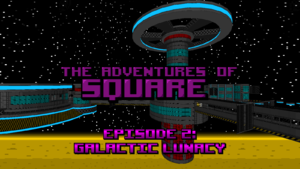 The Adventures of Square is a stand-alone game for the GZDoom source port. Provided free of charge, it was developed by BigBrik Games, which is a team of longtime Doom community members.[1]

The protagonist, Square, must save the kidnapped scientist Dr. Octagon from the Circle of Evil cult. In addition to battling the cult members (circles) and their army of security droids, Square must protect the civilians (other polygons) he encounters. Settings are rendered in a bright, colorful style reminiscent of cel animation, with many hand-drawn graphics and textures. Voice acting and a complete soundtrack are also included.

Public beta releases began in August 2014, with version 1.0 appearing in November 2014. As of June 2019, the current version is 2.1, available as both a stand-alone Windows executable, called SQUARE.EXE, or an IWAD to be used with GZDoom. The stand-alone version is based on GZDoom version 4.1.3, comes with a separate icon, and is modified to only run The Adventures of Square. According to its press kit, the team will incrementally add levels, resources, and gameplay features to future releases, culminating somewhere in the future with a complete edition of three solo episodes, additional deathmatch maps, and even worse puns. A Mac OS package is available, and Linux support is also planned.

The game features over 100 voice clips for the protagonist, that play at scripted moments, during cutscenes, and randomly throughout the game. Many are shape-based puns, for example:

Knife Jerk – Carries a knife. Will run up and repeatedly stab to attack. Don’t get cornered. Health points: 50.

Paintgun Jerk – Carries a paintgun. Will fire fast projectiles, which can be dodged, but be wary of any snipers. Health points: 70.

Oozi Jerk – Carries an oozi. Very dangerous in groups, since their weapon’s bullets, while inaccurate, cannot be dodged. Health points: 70.

Elite Jerk – Only found in the final level of Episode 1. Carries dual oozis. Very dangerous. Will drop a password disk when defeated, allowing you to proceed. Health points: 140.

Airvolt – As above, but will fly over gaps towards you. Health points: 70.

Revolt – As above, with an extra deadly projectile attack, and harder to take down. Health points: 100.

Chatterbox – Robotic enemy which will get up close and personal to sink its teeth into you. Health points: 150.

Shatterbox – Only found in the secret level of Episode 1. When destroyed will hurl out damaging shards of ice over a short distance. Health points: 225.

Eyescreamer – A floating enemy that will hurl gooey projectiles and spit out Spy Eyes. Health points: 400.

Strongman – A tough, athletic enemy with a variety of melee attacks and a hook to drag you closer. Health points: 400.

Mini-Destructinator – A powerful robotic enemy with a vast range of attacks, including homing missiles, goonades, and lasers. Health points: 1500.

Spectra – A ghostly projectile-flinging enemy with the ability to vanish and reappear. Health points: 240.

Dark Spectra – As above, but with a more powerful projectile attack. Health points: 300.

Hellshell Launcher – Uses hellshells (red ammo). Fires an explosive round that knocks most enemies out in one hit.

Cresceptre – Uses magic marbles (purple ammo). Fires a steady stream of magic projectiles that seek out the enemy in your crosshair.

Defibrillator – Has infinite ammo. A melee-only weapon useful for repelling enemies in close range, and can also deflect incoming projectiles.

Goonades – Bursts into corrosive goo, trapping enemies. Deadly to all enemies in close range. Hold the right mouse button down to throw them further. Up to nine can be carried.

Fishtank – Prevents against drowning underwater, and is required to traverse vacuums in outer space. Lasts 90 seconds.

Wooden Crates – Not common. Generally do not contain anything.

TNT Crates – Most common. Explode violently when destroyed, and can be used against enemies or the player equally. Detonating them in front of cracked walls will blast the wall apart.

Nukage Crates – Found in hazardous areas. When destroyed, they scatter green goo, akin to the goonades – although this is a hazard to enemies and players alike.

Fizz-O Crates – Only found in the Fizz-O Pop Factory (Episode 1, Area 8). When destroyed, they create a bubbly explosion that painfully thrusts away nearby enemies (or players).