The Ancient Gods, Part One 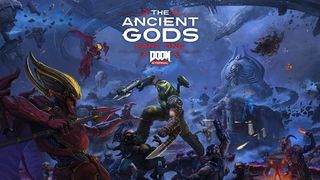 Title art for The Ancient Gods, Part One.

The Ancient Gods, Part One is the first single-player downloadable content expansion for Doom Eternal, and was previously available as a pre-order item to purchasers of the Year One Pass. While some details appeared on the Steam store page for the season pass previously, the expansion was officially announced by Bethesda during the QuakeCon at Home stream on Twitch on August 7, 2020, with release of a teaser trailer. A full reveal then followed during the GamesCom Opening Night Live event on August 27.[1] It was released on October 20, 2020.[2]

Following the Doom Slayer's defeat of the Khan Maykr and the Icon of Sin and the salvation of Earth, the Slayer learns that Urdak has since been overrun by the forces of Hell, which plan to use it as a staging ground for their conquest of reality. To return to Urdak and save the fallen paradise, the Slayer, aided by the ARC, reunites with the Seraphim (here revealed to be the secret identity of Samuel Hayden), who informs him that it is time for the Slayer to "serve the gods yet again".

The Slayer fights his way through the corrupted Urdak, eventually confronting the Transfiguration-afflicted Seraphim within the Luminarium. The Slayer is victorious over his former ally in the ensuing battle, but before he can strike the killing blow the Seraphim is teleported away by the Father, who tacitly approves of the Slayer's self-imposed mission. As the Dark Lord is resurrected, his body is revealed to be a perfect copy of the Slayer, at which point the story ends with the note "To Be Continued".

The expansion adds the following enemies to the Doom Eternal roster: