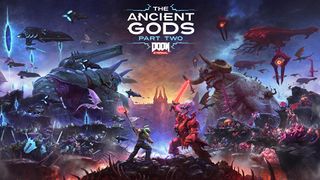 The Ancient Gods, Part Two is the second single-player downloadable content expansion for Doom Eternal. It was first available as a pre-order item to purchasers of the Year One Pass. Tangible details first appeared on the Steam store page in the form of achievement listings beginning on or around March 5, 2021. On March 7, Bethesda announced a teaser trailer release scheduled for March 15.[1] A full trailer was announced for two days later on March 17, and contained the expansion's release date of March 18 when it was unveiled.[2]

Part Two starts off where Part One ended, with the Dark Lord being restored to physical form after the Doom Slayer brought his life sphere to the Luminarium within Urdak. The Slayer shoots at the newly-formed Dark Lord, but it has no effect as the Luminarium forbids combat. The Dark Lord tells the Slayer that he will be waiting in Immora, the capital city of Hell, before leaving through a slipgate.

Some time later, the Slayer arrives at Argent D'Nur intent on reaching the World Spear, which contains an item capable of powering the Gate of Divum, a transporation device described as the only means of reaching Immora. After fighting through an ancient Sentinel village and obtaining the Sentinel Hammer from an apparition of Commander Valen, the Slayer activates the Torch of Kings which signals his mission to the entire planet and rides a wintherin to the Nether Lake, a body of water which surrounds the Spear. The Slayer crosses the lake and enters the Spear, which is revealed to be a giant ship. The Slayer takes a fragment of the Spear to use as a power source and uses another slipgate to return to Earth.

After travelling through an abandoned human city, the Slayer finds the Gate of Divum inside a UAC facility and uses the Spear fragment to power it before stepping through the portal to the outskirts of Immora. The Dark Lord is waiting for the Slayer with an army of demons; moments later, a Sentinel army appears behind the Slayer which engages the demons in battle. The Slayer breaches the outer walls of Immora and fights through the city, using portals and a Sentinel ship to carry him to the Dark Lord's inner sanctum.