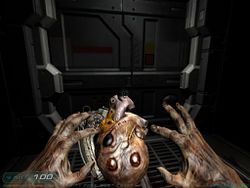 Hell's Artifact. Notice the corruption in the user's hands (this is only a visual effect and has no effect on the player).
This article is about the item found in Doom 3: Resurrection of Evil. For the items found in Heretic and Hexen, see Artifact. For the Top 100 1995 level set, see The Artifact (WAD)
"Hell reaches out for what is ours!"
― The Maledict [source]

The Artifact, also known as the Heart of Hell and the Bloodstone, is a demonic device available to the player in the Doom 3 expansion pack, Resurrection of Evil. This Artifact, as a powerful device of non-Human origin, is the equivalent of the Soul Cube from Doom 3. It is a demonic heart-shaped device that was initially designed to aid the forces of Hell, but is used by the marine. It also acts as a gateway between Hell and our dimension. The Ancient Martians captured the Artifact during Hell's first invasion, but were unable to destroy it, so they locked it away in a secret chamber.

When the UAC returns to Mars at the beginning of Resurrection of Evil, a Marine unit, Red Team, calls for an explosive charge to access the sealed Artifact's chamber. The game's protagonist places the charge, and, examining the Artifact, accidentally awakens it. This kills most members of Red Team and enables the forces of Hell under the command of Malcolm Betruger, in his new form as the Maledict, to invade once again. Betruger also sends the three Hunters to kill the Marine and retrieve the Artifact for himself.

Much of the game's plot revolves around the Marine learning the truth about the Artifact and ultimately setting out to return it to Hell where it can be destroyed. At the end of the game, the Marine brings the Artifact to Hell and uses it to destroy the Maledict. The Artifact itself is destroyed in the process.

In the PDA weapon information display, the Artifact is notably incorrectly described in a manner that seems more fitting of the Soul Cube:

"Created by the ancient civilization to defend against the forces of hell."
― PDA description

The Artifact uses human souls as opposed to demonic ones. When used near human corpses, it charges up by absorbing souls (visible as a red glow on a corpse) and destroying the bodies. The Artifact will absorb souls automatically when needed so long as it is being held over the corpse; it will not absorb a soul if it is already fully charged. Three charges can be held at maximum.

The Artifact itself has no attack capabilities, but is more strategic than the Soul Cube. It has the ability to give the player a period in which he manipulates time, gains super strength (similar to the Berserker powerup), and becomes temporarily invulnerable. These abilities become available each time the player defeats one of the three Hell Hunters, respectively.

A human heart-shaped object with a large curved handle, you will gain this at the start of the game but it will be useless until you defeat the Helltime Hunter, at which point the Artifact will absorb its Helltime abilities. Defeating the Berserk Hunter and Invulnerability Hunter allows the Artifact to absorb their abilities as well.

All powers possessed by the Artifact are activated simultaneously when invoked, meaning someone with a charged Artifact later in the game has the potential to become a lightning fast, invulnerable death machine that can rip apart a Hell knight with his bare hands. The weapon is not completely without disadvantages, however minor they may be - while in use, the Marine's vision is partially obscured by a swirling vortex of hellish materials, and his sense of hearing is impeded, both in a basic sense and by the constant whispering of unintelligible speech that continues for the duration of activation.

The Artifact is depicted in a number of ancient Martian civilization tablets recovered from Site 1 both during its original excavation and during Dr. Elizabeth McNeil's research expedition. Amongst them are the following:

When spawned, it appears as a black box. This is because Nerve never made a world model for it.

On the Nightmare difficulty, the Artifact will already be fully powered with all three abilities, but it will still be unusable until the Helltime Hunter has been defeated. Rather than absorbing the powers of the Hell Hunters when they are each defeated, the Artifact will instead become fully re-charged with souls. Also, there are noticeably fewer corpses available as Artifact charges on Nightmare difficulty.

As an aside, the Doom 3 Berserk artifact could be considered an allusion to the Artifact, as its powers are very similar to the ones given by a fully-powered Artifact. However, the Berserk artifact gives you a bloodshot red view and screams can be heard in the background while it's active, while the Artifact doesn't have either of these effects on use.