The Cursed Generation is a single-level PWAD for Doom II and limit removing source ports that came out in 2005. It was designed by Samuel Villarreal (Kaiser), is also known as Kaiser 19, and uses the music track "Nobody Told Me About id" from Doom by Bobby Prince. 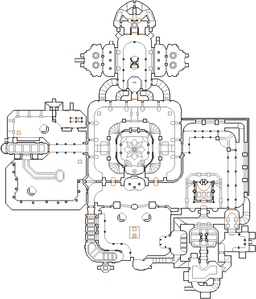 Map of The Cursed Generation
Letters in italics refer to marked spots on the map. Sector, thing, and linedef numbers in boldface are secrets which count toward the end-of-level tally.

* The vertex count without the effect of node building is 3527.