The Deimos Subway (SUBWAY.WAD) is a single-level PWAD designed by Neal Ziring. It was originally released July 23, 1994.

The architecture of the map simulates several subway terminals connected by wide, dark tunnels, storage and maintenance areas, and even a ticket counter and a concession stand. It includes a handful of replacement textures, such as graffiti and photos of Comet Shoemaker-Levy, and an original music track, which is a rendition of the jazz standard "Take the "A" Train".

The idgames package is titled SUBWAY21.ZIP, which should not be confused with SUBWAY11.WAD by Greg B. (May 12, 1994). A version of this map appears on Maximum Doom as SUBWAY2.WAD. 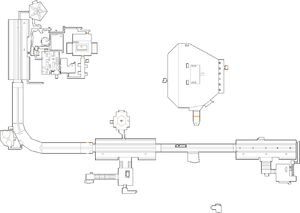 Map of The Deimos Subway
Letters in italics refer to marked spots on the map. Sector numbers in boldface are secrets which count toward the end-of-level tally.

The yellow key (thing 180) can easily be grabbed through the north wall of the car.

The switch that opens the exit (linedef 1585) can be activated from below without ascending the stairs that lead to it.

On both easy and medium skills, there are two computer area maps on the map, only one of which can be obtained, so 100% items is not achievable.

This information was last verified in its entirety on September 23, 2014.

* The vertex count without the effect of node building is 1475.

According to reviewer Myles Williams, the subway terminals themselves are modeled on the Metro terminals in Washington, D.C..

The coordinate range for this map is nowhere near the point (0,0). Ziring states that this is due to a bug in DEU v5.21 which produced a corrupted PWAD upon saving, forcing him to copy-paste the entire layout into a new file.