The Dying End is a single-level PWAD for Doom II and a limit removing source port that was released in June 2007. It was created by Christopher Lutz and picked up one of the Cacowards in the 2007 ceremory. In 2017 an updated version was included in his episode replacement Hellscape. 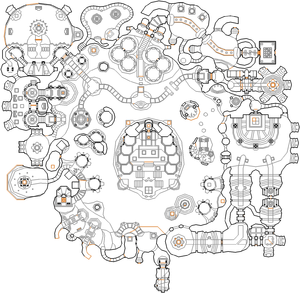 Map of The Dying End
Letters in italics refer to marked spots on the map. Sector, thing, and linedef numbers in boldface are secrets which count toward the end-of-level tally.

* The vertex count without the effect of node building is 10354.