The Farside of Titan

The Farside of Titan is a single-level PWAD for Doom II that was released in 1995. It was designed by Jim Flynn and uses the music track "Waiting for Romero to Play" by Robert Prince. 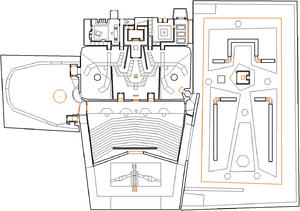 Map of The Farside of Titan
Letters in italics refer to marked spots on the map. Sector numbers in boldface are secrets which count toward the end-of-level tally.

The Farside of Titan is contained in a ZIP archive whose filename is farside.zip. Said ZIP archive has the following SHA-1 checksum:

The contents of farside.zip are as follows: