The Heart of Stone

The Heart of Stone is a single-level PK3 for Doom II and the GZDoom source port. It was designed by evil space tomato in 2015 and uses the music track " ". It reached fourth place in the Doomjà-Vu contest. 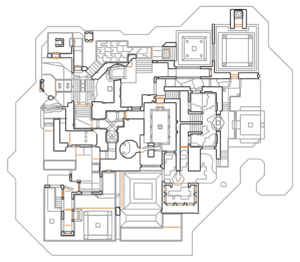 Map of The Heart of Stone, cropped to only show the playable area
Letters in italics refer to marked spots on the map. Sector numbers in boldface are secrets which count toward the end-of-level tally.

The map was created for the "Doomjà-Vu" contest organized by Daniel Gimmer (Tormentor667), thus it is based on the layout of E1M7: Computer Station.