The Inquisitor 2 (or The Inquisitor II) is a single-level Doom II PWAD, created by Shadowman and released on August 8, 2013. A sequel to The Inquisitor, released one year prior, it consists of a large map for the GZDoom engine, dubbed "Krondor Castle", which consists of a town, castle and several dungeons and mines populated both by friendly NPCs and hostile monsters. The mod is influenced by early first person RPGs such as Daggerfall and it features characters the player may talk to and quests to complete.

Much like its predecessor, the map originates from a competition held at iddqd.ru during July 2013, and once again features a layout originally created by a random map generator that was extensively modified and enhanced with GZDoom features to the point it scarcely resembles the original but while maintaining the initial map's vertexes and without exceeding the rectangle outlined around the initial map for gameplay areas. A sequel, The Inquisitor III, was released in 2016. 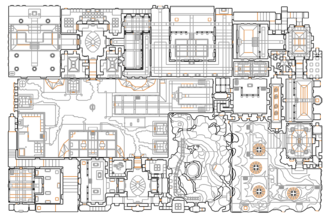 Map of The Inquisitor 2
Letters in italics refer to marked spots on the map. Sector, thing, and linedef numbers in boldface are secrets which count toward the end-of-level tally.