The Island is a single-level PWAD for Doom II designed by Jason Farlow (farlowj) for the ZDoom source port and released in September 2004. It is very large level set on a volcanic island, featuring lakes, forests and a large UAC base in the centre, as well as several visual and sound effects to enhance the ambience. Several new DECORATE monsters are also included, many from the then-new Monster Resource WAD. The author cited Far Cry as the main inspiration when designing this level. 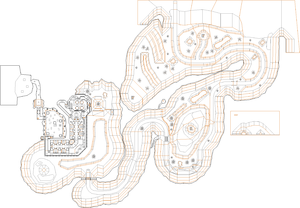 Map of The Island
Letters in italics refer to marked spots on the map. Sector, thing, and linedef numbers in boldface are secrets which count toward the end-of-level tally.

* The vertex count without the effect of node building is 7362.