The Island 2 is a single-level PWAD for Doom II designed by Jason Farlow (farlowj) for the ZDoom source port and released in June 2005. A sequel to farlowj's previous map, The Island, it once again features a similar setting as before, with large outdoor coastal areas and forested landscapes, but this time with a greater emphasis on indoor locations, including a cave system and a large UAC underground complex.

Included are the same monsters as in The Island, along with a boss enemy called Fallen Angel, which has 4750 hit points. 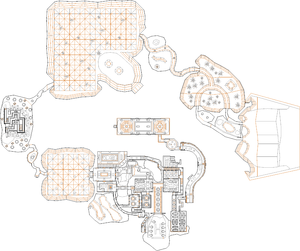 Map of The Island 2
Letters in italics refer to marked spots on the map. Sector, thing, and linedef numbers in boldface are secrets which count toward the end-of-level tally.

* The vertex count without the effect of node building is 10847.