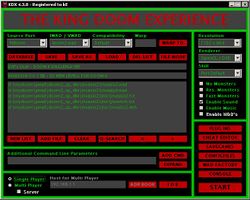 The King Doom Experience (KDX) was mainly developed by Christian B. Caldarone, and is a software application, which allows to manage the variety of Doom engine source ports together with the huge number of custom levels (PWADs) available online. In addition to this, KDX provided an online platform, so users could play together over the Internet without being worried about level settings and synchronization. The online platform was implemented using The Universal Master Server (UMS), a classic master server software developed as well by Caldarone. UMS is maintaining a database of online players and hosted game servers, based on continuous heartbeats UMS is receiving from its clients.

Besides the DoomCQ interface in ICQ-style, where you could find and talk to your online fellows, also an IRC-style interface was available, where you could join the KDX Chat Central lobby room, meet with people from all over the world, then eventually invite them for playing Doom online together.

To announce hosted games to the master server, a separate tool named KDX Server Reporter was available. The Server Reporter was acting as local system service to send heartbeats to the master and to listen for queries from the KDX Game Browser. The KDX Reporter could be installed independently on a dedicated game host and had launcher capabilities to allow Doom game servers to be hosted in a quick and easy way.

Yet another alternative was given by using the KDX-to-GSA gateway application. An easy and efficient network synchronization protocol based on TCP/IP for source port configuration settings and PWAD loading.

KDX did further interact with other third party software as well, thanks to its open approach and the intention to provide the best experience to the user. Therefore KDX came with built-in support for common Doom utilities like ZenNode, Glvis and others. As an extension to this, special plug-ins could be loaded to for example interact with: 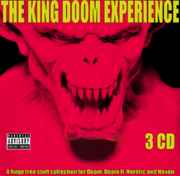 In 2003, Caldarone released a three-disc compilation, The King Doom Experience CD. It bundled the frontend and other utilities with the popular source ports of the time, as well as copies of all WADs in the idgames archive. The setup application purported to install all of these components to the user's computer in a single pass.