The Lost Episodes of Doom

For other uses, see lost episode. 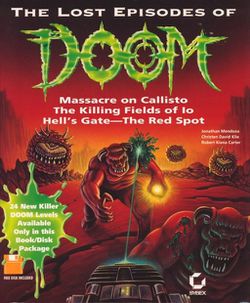 The Lost Episodes of Doom Cover

The Lost Episodes of Doom is a collection of three eight-level episodes for Doom by Christen Klie and Bob Carter. It takes place on the Jovian moons Callisto and Io, and on Jupiter itself. It was a commercial product and was included on a 3.5" floppy disk that was sold with a 246-page book that details the levels. The book is written by Jonathan Mendoza with some notes by both map designers.

The book was published by Sybex in January 1995.

You're the lone occupant aboard a utilitarian deep space probe returning to Earth. Your six-month reconnaissance mission of the outer Solar System is over and you're finally headed back home.

Lying motionless, seemingly lifeless, in the cryogenic glass and metal chamber, you resemble a techno-mummy in display. Only the readouts and blinking panel lights reveal there is indeed a heartbeat, though its rate crawls at a tenth of its normal resting state. When you put your head down in the comfy cushion of the cryogenic chamber and took a deep, prolonged breath, you knew two months would pass before you would open your eyes again, at which time you would be approaching the lunar space station. "Then I'm headed for the mountains," you told yourself, giving in to the overwhelming feeling of elation induced by the chambers' gases. But fate had other plans for you.

As your probe enters the large nether region between Mars and Jupiter, coming within a few thousand miles from the asteroid belt, the navigation system eases the ship into a complete stop. A chain reaction of commands and subroutines restores breathable air in the cabin. Meanwhile, the chemicals in the chamber self-adjust to normalize your metabolism. As consciousness returns and the clouds of deep sleep begin to dissipate, You see yourself headed for the mountains. But you're still dreaming. Any premature feeling of euphoria is swiftly squelched as the seal of the cryo-chamber breaks open. The high-pitched shrill you hear is an unmistakable distress code signal.

Moving with the characteristic stiffness of one whose body has just been awakened from suspended animation, you move to the console to find the source of the transmission that caused the ship to stop. Much to your amazement, there are two incoming signals. One is from the scientific Martian outpost in Phobos. The other signal beckons from the smaller facilities on Io, the outermost moon of Jupiter. You immediately think of the Anomalies and wonder whether the United Aerospace Corporation's experiments with inter-dimensional space travel are to blame for whatever's happened.

Before embarking on your long scientific mission, you pleaded with UAC's board to postpone human experiments until more studies could answer basic questions about the Anomalies. But the giant conglomerate could not wait. The Anomalies were the single most important scientific discovery of the century. Apparent ruptures in the fabric of time/space, the Anomalies opened the possibility of instant space travel. This was of great interest to UAC and not only for scientific reasons. Potential for profitable military, industrial, and commercial applications was immeasurable. UAC moved quickly to set up bases in Phobos and Deimos, the twin Martian moons, where the Anomalies were first discovered.

Many scientists, who, like you, had also voiced their opposition to UAC's experiments, were quickly "relocated" to other projects. A good number of your colleagues wound up on Io and Callisto, Jupiter's outer- most and innermost moons, respectively. After confirming the location of the transmissions, you only hesitate for an instant as you ponder what you should do. You know there is a large contingent of Marines on Mars. Surely they have already mobilized to help Phobos. Io and Callisto, on the other hand, only count with marginal military support. In the blink of an eye, your mind is made up. Though science is your main interest, you've been a Marine before. You know how to fight.

Your hunch about the Anomalies, as you will find out soon enough, is dead on. The gateways have become completely unstable. The human subjects who dared to jump through are emerging as blood-thirsty killers. But even more disturbing, a host of interdimensional creatures are also materializing in our universe. No one in Mars, Phobos, or Deimos could imagine that the interdimensional aliens were also materializing in Jupiter's moons. But then again, no one could possibly know that Jupiter's Red Spot was the largest gateway to Hell in the entire Solar system.

With a last click on the keyboard, the course for Io is set. You don't know what evil awaits you, but you're sure the mountains of Earth will have to wait just a little bit longer. 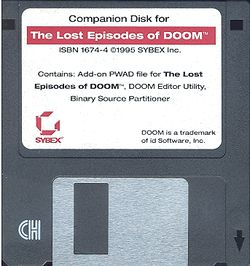 The first episode takes place on Callisto, one of Jupiter's moons. All of the levels in this episode were derived from Chris Klie's earlier episode, CHRIS_K.

The Killing Fields of Io[edit]

The second episode takes place on Io, the most volcanically active body in the Solar System. The first four levels in this episode were derived from CHRISK.WAD, with its E1M9 serving as E2M4. The remaining three levels were based on E1M9, E1M1, and E1M4 of BOBKDV2.WAD by Bob Carter, in that order, with the last level modified to become the boss level.

The final episode takes place at Jupiter's Great Red Spot. Realistically, a person would not be able to survive on Jupiter due to its harsh atmospheric conditions and intense gravity and radiation. E3M1-5 were based on E1M3 and E1M5-8 of Bob Carter's BOBKDV2.WAD, respectively, while E3M6 was previously released by Carter as B21.WAD.

The release features three built-in demos. All require Doom v1.666 to view them. The demo levels are: 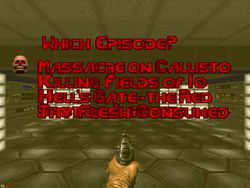 Issue while using with The Ultimate Doom
There is an evident issue during start-up when loading the add-on using The Ultimate Doom and its executable, because the most updated version of the game is not compatible with the v1.666 demos contained in the PWAD. As a result of the incompatibility, The Ultimate Doom will terminate after the title screen with the "Demo is from a different game version!" error message. As a workaround, one can start a game through the menu before the first demo starts or use the command line to load an episode, and as a solution, more tech-savvy users can edit the version number of the demos included in the WAD file.

The final episode is called "Hell's Gate - The Red Spot of Jupiter" in the episode menu. This spills over onto a second line, which was not a problem when Doom only had three episodes, because it was the last entry in the menu and there was space underneath. However, after the release of Ultimate Doom, which included Thy Flesh Consumed as a fourth episode, the second half of Hell's Gate's name is obscured (see screenshot). The player is still able to choose all four episodes, and this is just a visual glitch. There is a unofficial fix available at The Page of Doom.

The Lost Episodes of Doom add-on was distributed on one floppy disk. The disk image has the following SHA-1 checksum:

The contents of the disk are as follows:

The contents of JPTR_V40.EXE (a self-extracting LHA archive) are as follows: