The Outer Darkness is a single-level PWAD for Ultimate Doom and a limit removing source port. It was created by Varun Abhirama Krishna and uses the music track " " from Duke Nukem 3D, while the title, intermission and victory music were composed by Damian Lee (Lexus Alyus).

The Outer Darkness was awarded one of the 2007 Cacowards. 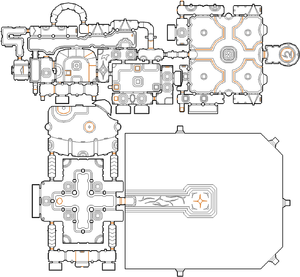 Map of The Outer Darkness
Letters in italics refer to marked spots on the map. Sector numbers in boldface are secrets which count toward the end-of-level tally.

* The vertex count without the effect of node building is 5947.