This level occupies the map slot Z2M3. For other maps with a non-standard slot, see Category:Non-standard map slots.

The Refinery is a single-level PK3 for Doom using the GZDoom source port that was released in September 2012. It was designed by Daniel Gimmer (Tormentor667) and uses the music track "Suspense" by Perkristan. Described as a reinterpretation of Doom's E2M3: Refinery with strong influences by KDiZD, it contains large array of new enemies and other custom content. 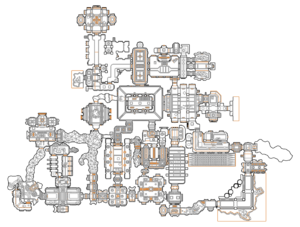 Map of The Refinery
Letters in italics refer to marked spots on the map. Sector numbers in boldface are secrets which count toward the end-of-level tally.