The Roots of Doom Mapping 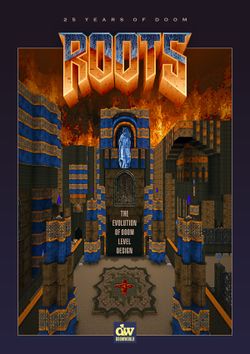 Unofficial book cover by elend, based on a screenshot of Sunder MAP15

The Roots of Doom Mapping or, The Roots of Doom Mapping: An Evolution of Level Design Through the Most Influential WADs Ever Made, is a featured essay written by Not Jabba and published in 2019 on the Doomworld forums as a continuation of the 25th anniversary celebration of the original Doom. It is a detailed and extensive manuscript that analyzes the historical background of the community from the perspective of the development and evolution of PWADs. Organized chronologically, it details mapsets of particular relevance, importance and influence in the community, while also presenting how they tied into the overall development of map making history. It also mentions important and influential authors across all eras and/or source ports.

Roots was written with the help of Demon of the Well, rd, Linguica and dew, providing input and feedback.

Clocking at around 32,633 words, it is, essentially, a condensed history book about the evolution of the community and WADs.

Chapter 1: The Masters of Doom[edit]

An essential introduction that presents the cultural impact of Doom on the history of video games, as well as popular culture. It describes the immersive impact that the game had, mainly thanks to its complex and serious design that, despite having certain cartoonish aspects, manages to establish itself as an action horror game. This chapter focuses on analyzing the first examples of map design in history: the maps created by id Software employees, such as John Romero and Sandy Petersen.

This chapter mostly focuses on the first examples of mapping history, showcasing the natural state of the first game levels ever made. Important factors mentioned include: the surgical usage of lightning, the design of cramped areas, and the claustrophobic architecture that helped build the action-horror style.

Chapter 2: The Fine Art of Sadomasochism[edit]

The chapter explains the relationship between the change of visual themes with the conversion change of gameplay styles, and how its emergence is born from a need to create maps with designs that are more challenging, and at the same time, adaptable to a new combat that is more intense, open, and faster. The huge influence of the Casali brothers would be noted in the future with such megawads as Hell Revealed, famously known for incorporating extremely challenging sets of gameplay that encouraged competition in the form of speedrunning.

The Chord series, by Malcolm Sailor, acts as the antithesis of the gameplay style presented by Plutonia and Hell Revealed. It ditches the large open areas and high density of enemies for more tighter combat scenarios and meticulously planned enemy placement.

Chapter 3: Lost in the Adventure[edit]

While the influence of such megawads like Plutonia, worked as a way to diversify the branches of the map making community, some level designers were aiming towards a greater scope that focused more on narrative; a way to create a set of levels that felt like an immersive experience, encouraging exploration, history, and cohesive architectural design. While in other WADs like Plutonia, most maps exist solely as a battleground, this kind of new adventure-like WADs tried to create a more grounded yet adventurous experience.

The chapter starts by showcasing the biggest example of this new philosophy: Eternal Doom, a megawad that opposed the fast-paced all-guns-blazing action of Plutonia, and instead solidified its nature on puzzle-solving missions, expansive environments, and realistic designs.

Grove, Epic 2 and Sacrament are used as examples of this style of adventure WADs that focus on exploration, visuals, and scope.

With the increase in map population and the diversification of various mapping styles, there was now a clear category for a variety of WADs that either focused on combat, exploration, or immersion. While all the previous WADs were influential and well-done in their own styles, they were seen as niche maps that were meant for a predefined audience. Those that enjoyed Plutonia but wanted more stylistic visuals would probably not enjoy Doom Eternal due to the puzzle-heavy nature of it, and vice versa. Thus, a community convergence occurred that synthesized the main design philosophies into a single style that could cater to a broader audience.

Alien Vendetta is regarded as the most influential project of all time. It represents the union of all the previous themes into one overall style that works as a synthesis. It is also mentioned as the first great modern megawad, in contrast to the last classical megawad, a comment made by Mike Watson (Cyb) in the Top 100 WADs of All Time feature.

With the evolution of upcoming WADs that tried to follow the same ideals, Scythe is mentioned as another example of an extremely influential project that managed to create its own style by blending multiple design ideals into a single cohesive unit of mapping prowess, showcasing intricate visuals with a very fast-paced combat that was balanced for both newcomers and veterans alike.

Deus Vult is used as the ultimate amalgamation of the combat design philosophies of the time. A single level that captures the feeling of a megawad into a single unit.

Chapter 5: When the Walls Fell[edit]

With the public release of Doom source code in 1997, the source port explosion started, and new features were being developed that would culminate in a major step of WAD history. This chapter mentions the huge influence and importance of both Boom and ZDoom (and their derivatives), and how they opened the doors for further levels to be made.

Void was the first ZDoom WAD that gained popularity for showing off a plethora of new ZDoom-exclusive features.

RTC-3057 followed by focusing instead on a more realistic approach and heavily detailed geometry.

With the inclusion of modern tools and the removal of vanilla limitations, more WADs were being designed with highly ambitious goals. Thanks to DECORATE and ACS, level designers were now capable of not only making their levels more detailed, but also including scripted events and even change the core gameplay of the game.

Action Doom was the first ZDoom project to exploit its features to the top, changing the original core mechanics of the game into something completely new.

Simplicity, on the other hand, used the new features in a more subtle and gracious way, instead opting for more traditional level design choices but with modern features.

The Ultimate Torment and Torture, Knee-Deep in ZDoom, and Putrefier are also mentioned as examples of highly advanced ZDoom/GZDoom projects.

Chapter 7: The Age of the Community Project[edit]

Community Chest 2 is mentioned as the first successful community project that managed to lay the foundations of future, similar WADs.

Congestion 1024 is mentioned as an off-spring of this newly formed movement, and an example of a project that used limitations as its main design choice, something that would influence the community greatly.

This chapter presents the dilemma of modern mapping and the classical style of the early 2000s, mostly the impact that Alien Vendetta left and how the community evolved beyond the antique precepts of WAD making. Diversified and quite congested, around the mid-2000s, the community was in a middle boiling point of ideas, suffering a sort of identity crisis that left a gap between both eras. It was during this time that a second wave of extremely influential WADs would help close that gap and establish themselves as the first examples of modern masterpieces that also worked as monuments of yesteryear.

Scythe 2 is considered the very model of a modern major megawad. The pacing, visuals and style of the megawad contributed to a generalized idea of what a modern WAD should be, influencing countless future projects.

Another example of a WAD that honored classic concepts with a more modern approach is Plutonia 2, an unofficial sequel that would launch a famous series in tribute to the original. A tipping point on the era of Plutonia-esque maps.

Valiant would be considered the next step in the Scythe-like style of mapping design, sporting iconic levels that mix both frantic gameplay with unique visuals, reaching the highest point in Boom-compatible map making history.

Despite the thriving state of the community, the mid-2000s were a time of overly ambitious projects that were focused on pushing the limits of the engine. The old-school, 90s style of map making was long outdated and outperformed. This impulsed a bubble of mapping artistry that ultimately exploded in a resurgence of classical, vanilla-styled WADs. The vanilla format itself became an attractive challenge that was tentative to skilled mappers.

Suspended in Dusk was a prime example of this resurgence in vanilla-styled WADs. Sporting extremely detailed geometry with realistic outputs and traditional gameplay with simple flow, all under vanilla limitations. Suspended in Dusk was also praised for its visual prowess, thanks to the quality usage of textures and color palettes.

Back to Saturn X would be the megawad that re-launched the vanilla format to a complete new scene, that, to this day, is still highly active. Pushing the engine to the limit, it showcased the best-of-the-best examples of vanilla maps with complex designs, new graphics, music, profound layouts, and intricate vanilla tricks.

The first mentions of modern slaughter and all its influences. At this point, two clear schools of thought of map makers existed: the modern Scythe and Alien Vendetta inspired, and the vanilla, 90s tribute scene. There was still a gap for those that sought a greater challenge, similar to what Plutonia once created. A new wave of authors would bridge the gap and create new levels that would be known for their extremely high difficulty and overly detailed designs.

Sunder would be one of the first and most popular WADs in the history of the community, due to its high skill demand and superb design quality. The enormous size, massive scope, large number of enemies, and the complex level of quality, would characterize Sunder, and its influence would be spread wide across the community.

Stardate 20X6 and Swim With the Whales would further build upon this concept of sheer beauty and hostility.

A side effect of such an old and expansive community, is that a lot of mapping rifts and divisions had been established, both formally and informally, around WAD history. With a clear cut between the classicist and the modernists, the community cycles towards stages of both development and embrace for the traditional, and just like previous eras, a synthesis occurs, joining and blending styles into a single entity.

The Adventures of Square was among the first stand-alone games for GZDoom that captured both the spirit of classic maps with the advanced features of GZDoom.

The Alfonzone followed a similar path. A hub-styled megawad that embraces the signature classic style of gameplay, but with an entire collection of ZDoom mechanics.

The Slaughter Spectrum closed the gap between GZDoom and slaughter maps, a style that was predominantly dominated by Boom-compatible ports.

Dimension of the Boomed showcased an example of a Boom-compatible WAD that felt like ZDoom, due to its intense use of mechanical tricks and advanced features under Boom limitations.

Finally, Eviternity paved the way to a more universal approach that was welcomed by all kinds of audiences and source ports. Created under an MBF-compatible format, its highly advanced features are also a collection of meticulously designed tricks and detailed maps, ensured to work with as many source ports as possible under the best conditions. Using the newly created ZScript, it managed to create compatibility settings that allow the megawad to activate or deactivate its advanced features according to the source port of choice.