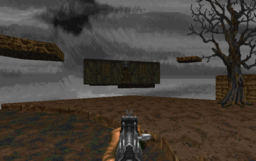 A floating house in the Shattered City. 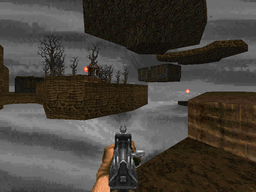 Several floating islands and buildings: a typical sight in the Shattered City.

The Shattered City is the first episode in Strange Aeons.

The episode takes place on the broken remnants of a shattered world somewhat resembling earth, drifting through a strange aethereal void. It is the first realm explored by the Traveler, the megawad's protagonist, and is mainly populated by Devils -- an extremely aggressive imp variant -- slime-spitting Grells, and armies of gunmen.

The player has many opportunities to fall off of the many islands comprising the realm. However, doing so is non-lethal: the player is simply teleported to his starting location (or the middle of an ambush). It can often be used as a means of escaping hairy situations.

The Traveler begins his dream quest in the Shattered City, searching for a way to the utopian city he witnessed in his recurring dream visions, where he saw his dead son David alive and well. After venturing across the realm and overcoming a brief encounter with the Shadow Beasts in prehistoric earth (visited later in The Land That Time Forgot), the Traveler suffers a dream vision of a dilapidated fortress of rusted metal in an apocalyptic future earth. He hitches a ride with aethereal sailors, who explain that the facility is known as The Stagnant Fortress, and may be significant to his quest somehow. However, they warn him that the dead are best left buried. Desperate to see his son again, the Traveler ignores their warnings and prepares for a second dream quest.