The Sky May Be

The Sky May Be is a semi-serious joke WAD for Doom.

It was created by Doug the Eagle and Kansam. Kansam is also known for Kansam's Trial. Doug the Eagle has recently been mostly known for his highly humourous "anti-walkthroughs" and strange findings from Ultima game series, and other games as well.

The WAD is named after a texture experiment, where one of the textures was called "sky (maybe)". While the texture wasn't ultimately used in the WAD, the name stuck.

The WAD consists of Douglas Adams-style humor throughout three levels, two of which are training levels: E1M1 is a stock-up level, E1M2 is another tutorial level.

E2M1 is the actual giant level where most of the action happens. It has extremely ugly graphics (most wall textures consist of single colour, or are based on Windows 3.11 screen shots), incongruous music (Bach's Brandenburg concerto no. 3) and strange sound clips (from various movies and TV series, etc).

Also included is the Blessed Engine DeHackEd patch, version 1.6b, which changes a lot of things about the weapon and monster behaviour in a way that probably doesn't make a whole lot of sense, but will undoubtedly be quite amusing.

The Sky May Be was featured in Doomworld's Top 100 Most Memorable Maps, placing 7th. 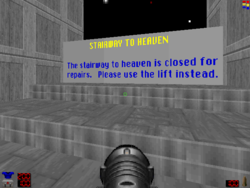 The Sky May Be played with ZDoom.

From the text file included with the file:

The Great God Imp has shown mercy on your soul and cast you into the hellish pits of his virtual toybox.
Running around the garish lego buildings, you become aware that the virtual toychest is actually running under windows 3.11. However the mouse is broken and the ALT and F4 keys have been removed.
You must find a way to shut down the system and end this nightmare!
Oh, and watch out for the Great God Imp. He may not be so kind next time He sees you.

The Blessed Engine is an DeHackEd patch included with The Sky May Be. Among other things, it does the following:

A standalone version was released on May 26, 1997. This version includes support for The Ultimate Doom.

The Blessed Engine for Doom II[edit]

For a long time, the WAD has divided opinions; it's often seen as either worst WAD ever made, or work of a genius. On the aims, Doug the Eagle writes, "my chief aim in 'The Sky May Be' was to create something totally new and utterly unlike anything that had ever been seen in Doom before. I believe, that for good or ill, I succeeded in that goal."[1]

The review by Cranky Steve's Haunted Whorehouse, a feature hosted at Something Awful that focuses on inept custom level design on various FPSes, gave the WAD the score of -48, lowest of the three Doom/Doom II WADs reviewed on the site. It is also enshrined in the DoomWorld's Top 10 Infamous WADs list.