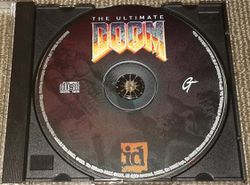 The Ultimate Doom CD from the Depths of Doom Trilogy collection.

The plot of the new episode is indicated to occur between the events of the original game and Doom II. Though the exact location of the new levels is unknown, the ending of episode 3 implies that the protagonist is on Earth after entering the hidden doorway from Hell. The ending of the new episode declares that the spiderdemon had already sent forth its legions, and that the player is aware of them rampaging through Earth's cities.

For the release, the programmers involved made some small tweaks to the source code as required for the new episode, adding the necessary text strings, a fourth-episode demo to the demo sequence, and modifying the boss death triggers to accommodate for new boss situations in the sixth and final levels. This last change had the side effect of making the modified executable incompatible with a few PWADs that depended on the old trigger behavior. Additionally, the programmers also fixed a glitch existing in previous releases where lost souls would not bounce on the floor or ceiling as intended. This change caused some demos previously recorded on levels including these monsters to desync.

In other respects the engine performs like Doom version 1.9, and in fact is still marked and internally considered as "v1.9" regardless of the changes mentioned previously, which produce occasional incompatibilities. As such it can run the 1.9 versions of Doom and Doom II, although when doing so the additional fourth demo is still requested by the executable, resulting in the termination of the program immediately following the third demo of the looping demo sequence. Also, when running the non-Ultimate 1.9 version of Doom the executable still expects the M_EPI4 lump, so that the engine will crash when showing the "Which episode?" screen.

Before the expansion's release and before the name The Ultimate Doom was chosen, the game was referred to as The Definitive Doom Special Edition. References to the original name can be found in the source code and in the DOS installer of the game, which features the shortened name DOOM: Special Edition on the titlebar and suggests DOOM_SE as the default installation directory. This name was also used in early press material referring to the add-on.[5]

In the 2015 Doom source data release, an early version of the Ultimate Doom executable is included in the DoomMapsSE folder of the doom-maps.zip file. When run, its startup displays the title "DOOM System Startup 1.9 Special Edition" in black characters on a cyan background, instead of "The Ultimate DOOM Startup v1.9" in dark gray on light gray background.

The DSDA movie run records for The Ultimate Doom are: