The Unholy Trinity, or Trinity College, is a single-level PWAD designed by Steve McCrea, Simon Wall, and Elias Papavassilopoulos. As part of their 10 Years of Doom feature, Doomworld named it one of the ten best WADs of 1994.

This map uses a large number of custom textures to create striking "photorealistic" buildings and courtyards, modeled on the real Trinity College in Cambridge, England. It also features an original animation sequence and a replacement music track, which is a partial rendition of "Toccata and Fugue in D Minor" by Johann Sebastian Bach.

Trinity was originally released on August 22, 1994 (as "trinity.wad"). A second version ("trinity2.wad") was issued September 4, 1994 to fix a bug involving texture patches. 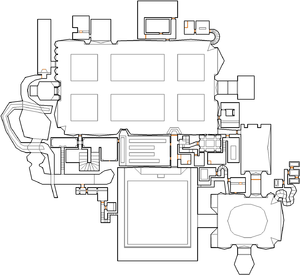 Map of The Unholy Trinity
Letters in italics refer to marked spots on the map. Sector, thing, and linedef numbers in boldface are secrets which count toward the end-of-level tally.

Step into first court and get to the extreme north-east of it. Enter the arch leading to the curvy stairs (at first glance, you may think it is a texture; in fact, this is fake one). Enter the first room, then second and take the blue key. Backtrack outside into the court.

In the court, go south-westward to open the blue door. There, go upstairs and turn right. Press the switch to get access to the southern court. Enter the tiled door. In the small outside, enter either door that reads "poison". Step into the southern court. There, turn left into winding tunnel to find another court. Enter the north-eastern arch (again, you can walk through this texture) to find a staircase inside. Walk up and go northwards along the corridor. Open the door to your right, then to your left. Have the yellow key. Other rooms here are optional. Backtrack to the court, then as a shortcut use the northern area. Open the door leading northwards and open the yellow door leading to the initial court.

Open the door requiring the yellow key in the north (the initial court). Blow up the barrels and enter the door. Grab the red key and return to the court.

While in the initial court, enter the main entrance south. Here, walk into southern court. In that court, turn left and enter the arch (you can also enter this place via the south-eastern court). Open the door requiring red key. Lower the shelf which distinguishes a bit from others. Flip the switch for the end.

* The vertex count without the effect of node building is 1299.

The original WAD is not compatible with Ultimate Doom, but there is a patch ("trinityu.wad") that fixes this.

Rial Fletcher released a Doom II conversion of Trinity in November 1996. Olivier Montanuy released a Heretic version in March 1995 (not February 1994 as the readme file claims), with the music track removed as it tended to crash the game.