The Waterfront (WTRFRONT.WAD) is a level created by Scott F. Crank in May 1995. It is often considered the earliest level to deliberately exploit the ghost monster bug, which its text file calls the "arch-vile bug", although Sin City, whose wad file is dated two weeks earlier (16 May 1995) but was released to the idgames archive later (5 November 1995), uses it on MAP02. The author provided an additional text file documenting how ghost monsters are created, and how they can be killed only by rockets (or infighting), with a demo illustrating the technique. 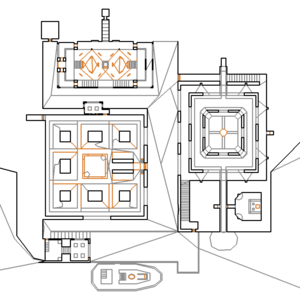 Map of The Waterfront
Letters in italics refer to marked spots on the map. Sector numbers in boldface are secrets which count toward the end-of-level tally.

The release includes a separate demo file, WTRFRONT.LMP, by the author. It requires Doom II v1.9 to be viewed and runs for 18:18.14 (38435 tics), showing off the level on Ultra-Violence.

* The vertex count without the effect of node building is 1243.