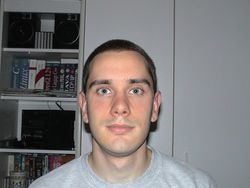 Thierry Van Elsuwé (aka Hurdler) is the creator and the programmer of the OpenGL renderer in Doom Legacy and is a major contributor to the port in general. Born in 1977, he comes from from Brussels, Belgium, and is currently employed as a programmer.

Hurdler joined the Doom Legacy team after being "recruited" by Boris Pereira, co-founder with Denis Fabrice (faB) of the project. The two studied together and Pereira sought his help in writing the OpenGL renderer. He later helped to put the source code to Legacy into CVS. With the departure of both of the co-founders Hurdler now acts as the lead programmer in the project.