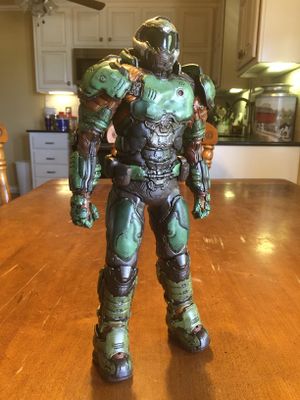 The ThreeA one-sixth-scale Doom marine is a limited edition[1] action figure created by Hong Kong collectibles company ThreeA (branding also stylized as "3A") under license from Bethesda, initially announced and opened to pre-orders on August 4, 2016,[2] closed to pre-orders as of September 29, 2016,[3] and initially shipped in second quarter 2017. The figure was produced in two editions. Compared to the standard edition, the exclusive "Store Edition" features an added weapon, the chainsaw, and was only made available through the Bethesda Store and the Bambaland.com ThreeA official storefront. It is a detail-complete and accurate re-creation of the Doom Slayer from Doom (2016) at one-sixth scale (slightly over one foot tall, placing the Doom Slayer at 6 feet 6 inches or 1.9812 meters in height). The figure comes in a cardboard box which resembles the sarcophagus in which the Doom Slayer was sealed by the demons of Hell.

The figure was noted by some community members as being difficult to obtain due to its pre-order-only nature, poor communication about periods of availability, and extensive scalping activity which saw a large number of the figures being resold on outlets such as Amazon and eBay for mark-ups as high as 250%.[4]

Collectors have criticized the fact that the figure is not accompanied with a stand, usually considered a standard feature for collectible figures in this price range.[5]