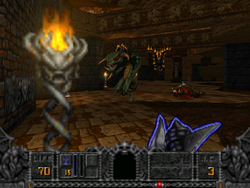 Timon's Axe being used against a Green Chaos Serpent.

Timon's Axe is the second of four weapons used by Baratus the Fighter in Hexen. It is first found in Hub 1: Seven Portals, and appears scarcely through the rest of the game. It is a short, one-handed axe that uses blue mana for empowerment; while supplied with it, the axe emits a blue glow. Mana cost is 2 points per hit, but mana will only be consumed if the axe hits an enemy, or a jar. Swinging at the air or striking a wall will not use mana.

When mana is available, it is a powerful weapon. An ettin will regularly die from two hits, and afrits will die after being struck by a single blow. Its high attack power combined with a rather fast attack rate give it the highest damage per second of all non-ultimate weapons (tied maybe with the Firestorm). An experienced player can chop down a group of ettins or afrits in a few seconds. If need be, more powerful enemies can also be reasonably engaged and destroyed, with some prudent play.

Timon's Axe can be used without mana at approximately half of its damage potential, functioning as a mundane axe without its blue glow. However, it is relatively weak in this state, so if no mana is available it is recommended to switch back to the Spiked Gauntlets. 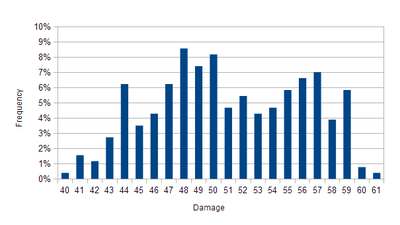 In the IWADs the Timon's Axe is first encountered on these maps per skill level:

The IWADs contain the following numbers of Timon's Axes per skill level: