This article is about the creature from Doom Eternal. For the 2004 mapset, see Titan (WAD). 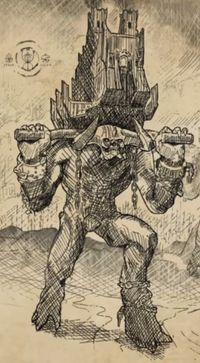 Codex depiction of a Hell barge

Titans are gigantic demons, first mentioned in the lore of Doom (2016), and appearing in Doom Eternal. Despite their incredible size, most Titans are not enemies in the game; they are instead referred to as thralls, mere beasts of burden for the forces of Hell.

Many if not all Titans are effectively immortal. The only known way to defeat a Titan is to kill it with high-powered Argent energy weapons such as the Crucible or the spears and cannons of the Atlans.

The Hell barge is a class of Titan used as transportation, carrying massive portable temples. The first Titan encountered in the game is such, and is seen in Hell on Earth after killing the Hell priest Deag Nilox. It wanders away aimlessly, the psionic backlash of its master's death having apparently rendered it mindless. Other Hell barges can be seen during the course of the level carrying temples, presumably transporting the other Hell priests to the Citadel for the Deagic Council. 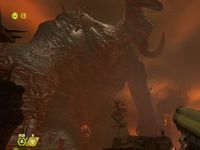 A titan seen in the first level of Doom Eternal after the player exits the Hell barge.

A chained and tortured titan in Nekravol.

The Titan's Realm was apparently formed from the remains of a Titan killed by the Slayer in the distant past.

The body of another Titan, referred to as "the Dreadnought", is seen in Taras Nabad. It is already slain, said to have been defeated by the Doom Slayer long ago. The hilt of the Crucible is retrieved from its heart; the blade remains in its body, as removing it would allow the Titan to resurrect itself.

Other enthralled Titans are seen in Nekravol. Notably, in Nekravol - Part II, two of them hold the Argent transmitter tower aloft on chains. Destroying these chains allows the destruction of the transmitter, via which the Slayer can reach Urdak.

The Icon of Sin, met in Final Sin, is also classified as a Titan. This is the only Titan that is actually fought during the game.

In The Ancient Gods, Part One, a titan called Maligog appears. It is not fought directly, but the Slayer must complete its trial to proceed through the Blood Swamps to the Ingmore Sanctum.

According to Night Sentinel scholars, the cacodemon may be distantly related to a certain species of one-eyed Titan.