To Fight is a single-level PWAD for Doom II meant for limit removing source ports and released in January 2009. It was designed by Alexander S. (Eternal) and uses the music track "Dracoid Ruins Battle", originally from Lands of Lore: Guardians of Destiny.

This map is the third and final entry in Eternal's 2x2 series, following the previous month's Eclipse and Nightomb. Once again, it features only two textures and two flats used for the entirety of the map, but unlike its predecessors, it is a slaughter map, more in the vein of Eternal's previous maps, Generator of Evil and Belial's Bad Brain. 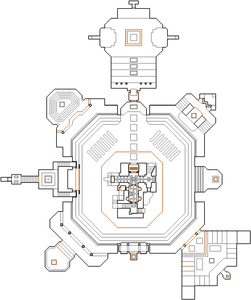 Map of To Fight
Letters in italics refer to marked spots on the map. Sector, thing, and linedef numbers in boldface are secrets which count toward the end-of-level tally.

* The vertex count without the effect of node building is 2525.