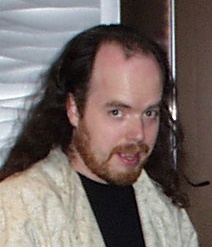 Tom Hall is a Wisconsin-born game designer who, along with John Romero, John Carmack and Adrian Carmack was a co-founder of id Software.

Hall was originally the creative director and lead game designer for Doom, and is the author of the Doom Bible, the original 1992 design plan for the game. Although he lost his job after various disputes with John Carmack over the design of the game, numerous elements of his documentation carried over into the release of the game. Hall introduced several central gameplay elements during development; teleportation devices—now seen as rather standard fare in FPS games—were unfavored by the team, and Carmack and Romero only added them after considerable argumentation from Hall. According to Romero, "Tom pushed to put teleporters in". This reflects the same situation Hall faced when arguing for the inclusion of "secrets" in Wolfenstein 3D, the previous FPS effort by id Software. Says Tom, "I really fought to have those."[1] During development of Doom secret areas were already expected, having become a natural part of the FPS vocabulary. Other elements essential for game play introduced by Hall, although visual in nature, were concepts such as having the door trim match the color of the needed key.

He has stated he ultimately "was totally unhappy" working on the game, because he felt the development team "were getting way too minimalistic in player reward", saying "[I] wanted a reason for the person to go through the levels, rather than [just flipping] a switch". The game turned into what Hall characterized as "just a raw shooter", and the gaming world he envisioned, with character abilities, puzzle elements, environment interaction, cinematics, back story and game content, was being minimized or deleted altogether.

Hall is also credited with naming the WAD file format.

Having written the design document for Doom, including the back story taking place on Tei Tenga, he reused parts of it during his later career. As example; Hall co-produced the game Terminal Velocity for 3D Realms, and used Tei Tenga as an episode setting for the game. Game characters found in the original Doom design documents also make an appearance in Hall's next effort; Rise of the Triad, developed for Apogee. The game received Ziff-Davis' Shareware of the Year Award in 1995, making Hall the only person who has received the award twice. His first was for Wolfenstein 3D in 1992.

Hall's input is not limited to the original Doom alone; his designs still appear in the subsequent installments of the franchise. One of the levels he had designed for an alpha version of Doom, Refueling Base, found its way to Doom II. The Unmaker, a weapon involving spiritual soul powers described and presented in the Doom Bible, later appeared in Doom 64, the 1997 sequel for the Nintendo 64 console. The non-linear hub system he envisioned - and which was partly implemented in Doom 0.5 - can be found in Hexen and Quake 2. Doom 3, from 2004, uses a monorail, which was the transportation system laid out in Hall's design document. The game also implements the interactive computer terminals that had been designed a decade earlier by Hall.

Hall joined Apogee in 1994 upon being fired from id Software. During his time with the company he was the creative director for Rise of the Triad, produced Terminal Velocity and was engaged in the development of Duke Nukem II, Duke Nukem 3D and the first iteration of Prey. He left Apogee in August 1996.

After programmer and designer John Romero left id Software, Hall and Romero teamed up again and founded Ion Storm. After the company was closed Romero and Hall founded Monkeystone Games. Hall later left for Midway Games, then KingsIsle Entertainment in 2005, before reuniting with Romero at Loot Drop in 2011. As of 2013, he is currently Principal Designer at Glu Mobile's PlayFirst Studio, working on the Diner Dash franchise.

Hall was the designer of several maps in Doom and Doom II, although these were tweaked or expanded in varying degrees by Sandy Petersen or John Romero. The Alpha versions of Doom contain several other maps of his design in varying stages of completion.