For the 1994 Marc Norris map, see Torture!.
This level occupies the map slot E2M3. For other maps which occupy this slot, see Category:E2M3.

Torture is a single-level PWAD for Heretic, designed by Christopher Lutz and released in February 2001. The level takes place inside a cavernous dungeon, with lava rivers as backdrops. The design is mostly enclosed with tight spaces and a heavy density of enemies. With low ammo and tight combat, Torture can be demanding on the player's skills. 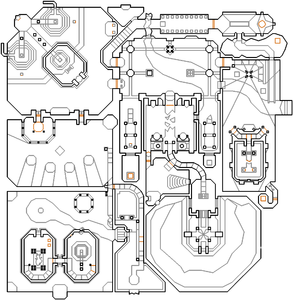 Map of Torture
Letters in italics refer to marked spots on the map. Sector, thing, and linedef numbers in boldface are secrets which count toward the end-of-level tally.

* The vertex count without the effect of node building is 2801.