Tremor is the single map of Tremor: Part I - Genesis that requires a ZDoom-compatible port (even if PrBoom can run it with bugs). It was designed by Ross Mathieson (zarkyb) and uses a custom music track credited to DiluteCo.

The level received one of the 11th Annual Cacowards at Doomworld. 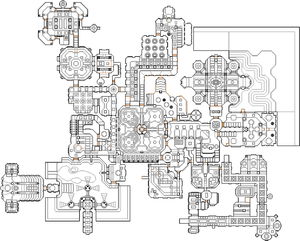 Map of Tremor
Letters in italics refer to marked spots on the map. Sector numbers in boldface are secrets which count toward the end-of-level tally.

* The vertex count without the effect of node building is 15356.