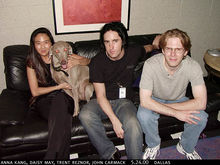 Trent Reznor is the frontman of the band Nine Inch Nails. As a fan of id Software and vice versa, he was asked to design the music and sound effects for Quake. Quake's nailgun ammo boxes also feature the NIN logo on them.

Reznor later did the initial sound design for Doom 3, but his material was eventually scrapped and replaced with other alternatives. Reznor's work on Doom 3 can be heard in the Doom 3 alpha builds, as well as via an unofficial sound pack mod.

During his tenure at id Software, American McGee was arguably the company's biggest Nine Inch Nails fan and even included a Nine Inch Nails Easter egg in one of his Ultimate Doom levels, E4M1: Hell Beneath.