The arena for the Trial of Maligog

The Trial of Maligog is a boss in Doom Eternal, encountered in The Ancient Gods, Part One. It is the boss of the Blood Swamps level. 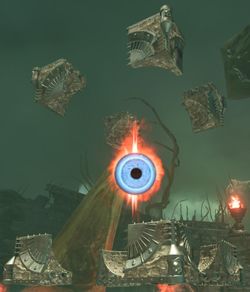 One of the metal blocks encountered in the trial

The Trial takes the form of four metallic floating blocks, which fly across the arena and occasionally open up to reveal an eye that fires red energy projectiles; these projectiles lead the player's expected position and slow the player down if they make contact. The blocks themselves are invulnerable, but sufficient damage to the eye will cause the block to fall to the ground; when this happens, the player must then strike the side of the block with a green punch symbol on it, causing it to slide into the shield in the center of the arena and self-destruct (also killing any demons in the arena). The first two blocks are fought one at a time, while the final two blocks are fought simultaneously. The trial is completed when all four blocks are destroyed.

The blocks move quickly and only expose the eyes for a short period of time, making hitscan weapons with long range such as the heavy cannon a good choice to counter them; alternatively, the Arbalest mod for the ballista will deal massive damage to the eyes, causing the blocks to fall after three direct hits. A Hell knight will also spawn to harass the player, followed by a pinky from the second block onwards and a second knight for the final two blocks; they will respawn a few seconds after killing them so they should generally be ignored or hit with the flame belch to regain armor.