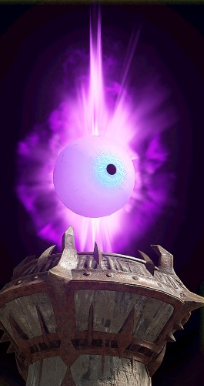 The turret as it appears in the Codex.

The turret is an ambient demon featured in The Ancient Gods, Part One, the first downloadable content expansion for Doom Eternal.

Turrets will fire upon the player once they come into the turret's field of view. Fire from the turret is fairly tame and serves more as a nuisance than a threat. The heavy cannon's Precision Bolt mod and the ballista are the best weapons to use against this enemy, with a single shot forcing them to duck and hide. The turret will also hide if the player's reticle lingers on them for too long.

The metal blocks encountered during the Trial of Maligog behave similarly to turrets, but they are able to move and their shots will slow the player if they make contact. In his boss fight, Samur Maykr is able to conjure turret eyes that cannot retract, but will fire blasts of lightning that hinder the player's vision and movement when they get close.

Turrets were created by Deag Nilox centuries ago, both to serve as stationary guards and to allow Nilox to view distant areas. Following his death at the hands of the Doom Slayer, the turrets continue to function as protectors and fire on any intruders within range. They consist of a "fellsteel" container holding an imprisoned lesser demon, which takes the form of an eye.