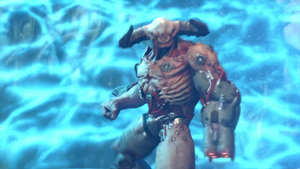 The tyrant emerging from a slipgate.

The tyrant is a new monster in Doom Eternal, and the next iteration in the class of cyberdemons.[1] It bears a close resemblance to the classic cyberdemon, with a similar suite of cybernetics, a gored abdomen, and a weapon which replaces its left arm. Unlike its Doom II counterpart, its eyes are not red; instead, they are yellowish-white. It also appears to be equipped with a metallic skeleton and an Argent accumulator, like its immediate predecessor.

The tyrant is a recurring major enemy, unlike its previous iteration.[2]

The tyrant is bipedal in nature, and draws many similarities to the original cyberdemon, although it lacks hock joints that gave it more goat-like legs and has distinct toes on its organic foot instead of a hoof. Both its right leg and left arm are cybernetics-enhanced, with minimal cybernetics along its right arm that can be used to project an energy blade. The tyrant's ribs are exposed, with its intestines replaced with tubing. Its spine appears to be mechanical, with vertebrae jutting out from the flesh. The tyrant has two large horns on each side of its head, and a bulbous cranium.

The tyrant mainly attacks by firing missiles from its arm cannon. If it cannot see the player, it will launch a missile barrage whose points of impact are marked by glowing runes. When it sees the player, it takes a moment for it to take aim, so this window of time can be used to attack. It is also slow to turn, so dashing around it is a good way to get a hit in. Occasionally, it will also use the cyberdemon's laser cannon attack, in which case the player should either take cover or dash at the last moment to ruin its aim. In close quarters, it will try to slash the player with its blade or use it to release shockwaves. Later levels frequently have them appear in pairs, so it is critical to keep track of where they are in order to avoid a careless death.

Tyrants possess a much less effective dash ability than the previous cyberdemon iteration, making them very slow and cumbersome by comparison; consequently, they are vulnerable to the meat hook and the super shotgun so long as the player can stay behind them. As they have enough health to survive a single direct hit from the BFG-9000, the most effective way to deal with them is to use the Crucible for an instant kill.

Tyrants are described as demon lords of the black soul pits of Babel which have long served as wardens and slavers of the infernal pits. As such, tyrants oversee the collection and extraction of sin-branded human souls from the mortal world while being feared by lesser demons for their sadistic cruelty and malice. They impose rule as ordained by the Unholy Sigil of the elder demon gods. They have been weaponized and enhanced with cybernetics by the UAC.

It is believed that the game was originally intended to have a smaller version of the Balgaar-based cyberdemon from Doom (2016), as the face of one occurs in the "25 Years" wallpaper released by Bethesda to celebrate the 25th anniversary of Doom on December 10, 2018.

In the E3 2019 presentation, the Tyrant's eyes are black, as opposed to the final game's glowing eyes.